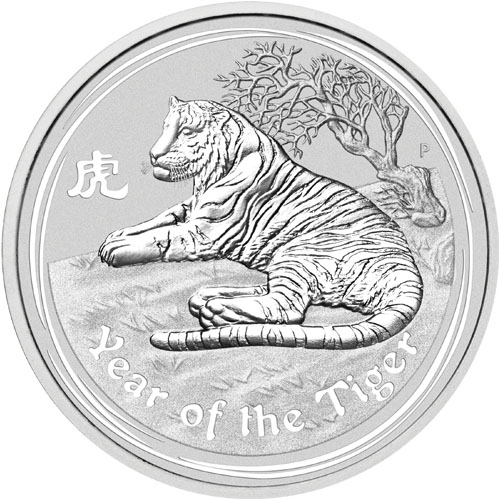 The silver coins for sale in the Lunar Series collections from the Perth Mint in Western Australia are, by far, the most popular coins of their kind. The Lunar Series collections in the early releases featured overlapping issues of silver bullion coins, resulting in two designs each for the Year of the Mouse, Year of the Ox, and the Year of the Tiger. Today, 2010 1 oz Silver Australian Lunar Tiger Coins are available to you online at Silver.com.

All of the 2010 1 oz Silver Australian Lunar Tiger Coins in this product listing come to you with a protective plastic capsule. This design is exclusive to the Lunar Series II collection and had a declared maximum mintage of 300,000 coins. The Perth Mint announced a complete sellout of its 300,000 coins.

Queen Elizabeth II is found on the obverse of 2010 1 oz Silver Australian Lunar Tiger Coins. Her Majesty is featured here in right-profile relief in a design from Ian Rank-Broadley. This image was the fourth-generation design used by the Royal Mint of England starting in 1998, but was the fifth-generation design in use on Australian coins and was adopted in 1999. This portrait of Her Majesty includes the Girls of Great Britain and Ireland Tiara on her head.

A tiger is shown on the reverse side of the 2010 Silver Australian Lunar Tiger Lunar Series II coins. This image depicts a tiger at rest, with its frame lying down amidst grass near a cliff with a small tree in the background field. The design element includes the Chinese symbol for a tiger and comes with a “P” mint mark from the Perth Mint.

Please don’t hesitate to reach out to Silver.com if you have questions about these silver coins. Our team is available on the phone at 888-989-7223, online using our live chat, and via our email address.