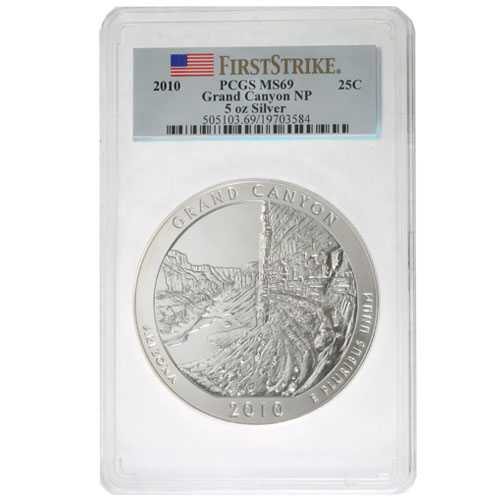 When the America the Beautiful Series launched in 2010, investors and collectors eagerly anticipated the US Mint building on the popularity of its circulation design series for the US quarter known as the State Quarters. Only three of the states in the US would have a representative park duplicated for the ATB Series, and Arizona was one of them. Now, 2010 5 oz Silver ATB Grand Canyon Coins are available to you for purchase online at Silver.com in near-perfect condition.

The State Quarters series from the United States Mint was conceived in the 1990s and released in a similar fashion to the America the Beautiful bullion collection. A select number of states received representation on circulation quarters over the course of time as the program focused on the 50 states, overseas territories, and the federal district of the United States.

Only Arizona, California, and Wyoming would see designs in the ATB Series representing the same parks from the State Quarters program.

For the state of Arizona, the obvious first choice was Grand Canyon National Park. A bill was first put before Congress back in 1882 to make the Grand Canyon just the third National Park in the United States. However, it would be another 37 years before the park gained status as a National Park. It has, however, been federally protected since 1893.

The obverse field of 2010 5 oz Silver ATB Grand Canyon Coins in this listing includes the left-profile bust of President George Washington. A Founding Father and leader of the Continental Army during the Revolutionary War, Washington famously turned down an opportunity to have more power as a leader of the new United States saying he didn’t want to replace a foreign king for one closer to home.

On the reverse of 2010 Silver ATB Grand Canyon Coins is a depiction of Marble Canyon. Part of the broad swath of land carved out of the rocks by the Colorado River, Marble Canyon is located in a region known as the start of the Grand Canyon.

These 2010 5 oz Silver ATB Grand Canyon Coins are available to you for purchase in near-perfect condition. Mint State 69 coins showcase full, original mint luster and have a maximum of two minor detracting flaws present. Those flaws are limited to minuscule contact marks or hairlines.

Silver.com customer service is available to you at 888-989-7223. You can also reach out to us on the web through our live chat and email address features.