The America the Beautiful coin series was set into motion in 2010, and the fifth release of the inaugural series is the 5 oz ATB Mount Hood National Forest silver coin. Like every coin in the first America the Beautiful series, this 5 oz silver coin celebrates the natural beauty of the United States. Comprised of 99.9% pure silver as certified by the US Mint, you will be hard-pressed to find a coin series more beautiful than this.

For decades now, the US mint has gained attention and respect from all over the world due to the quality and purity standards their coins adhere to. The America the Beautiful series is no exception in that it plays host to some of the most evocative imagery of some of the most iconic parts of the United States. More than just a coin series for National Parks, the ATB series celebrates landmarks, historic events, and most everything else that makes the United States what it is.

Championed by President Roosevelt during his time in office, the National Park system of the United States puts the national park systems of other nations to shame. Originally thought up back in the late 1800s, National Parks were seen as a great way to both display the natural beauty of the landscape, but as a way of preserving the natural aspects that make this country so great. Persisting even today, National Parks such as Mount Hood National Forest draw in millions of visitors each and every year.

The reverse side of this particular coin boasts a beautiful depiction of just one part of the more than 1,000,000-acre National Forest. With a serene body of water in the foreground and the dominant Mount Hood far off in the distance, the imagery on this coin really gives you a feel for just how massive this National park is. Surrounding the central image are inscriptions reading “E Pluribus Unum”, “Mount Hood”, and “Oregon.” The 2010 year of minting is located towards the center of the bottom part of the coin.

The coin’s obverse is designed to look exactly like a US quarter. Complete with a quarter-dollar face value and all appropriate inscriptions, the 5 oz ATB Mount Hood coin really feels like a large US quarter.

If any questions regarding this or any of our other America the Beautiful coin series arise, feel free to contact our helpful customer service staff toll-free at 1-888-989-7223. If talking on the phone isn’t your thing, you can also get in touch with customer service via email or live chat. 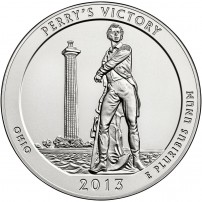