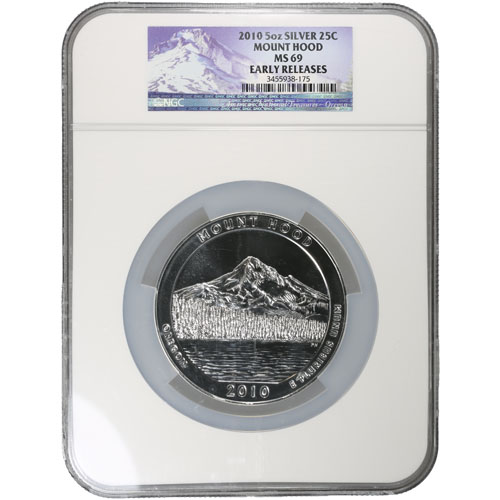 Display one of the most majestic mountains of the Pacific Northwest in your coin collection with this Mount Hood silver quarter. It’s part of the America the Beautiful series, which includes 56 unique designs representing every state, territory, and federal district in the United States. The 2010 5 oz Silver ATB Mount Hood Coin was the fifth design released in the ATB program.

The obverse of every coin in the ATB quarter series is common and features the iconic image of George Washington. The portrait design of the first president was created by John Flanagan for the 1932 quarter and has been used on the 25-cent piece ever since.

In contrast, the reverse side features an image unique to the 2010 Mount Hood coins. The image was designed and sculpted by Phebe Hemphill. It features Oregon’s highest peak, the volcanic Mount Hood. At the base of the mountain, a forest is depicted, and a lake is in view in the foreground.

The America the Beautiful quarter program included mintages of regular quarters as well as circulated and uncirculated silver bullion with 25-cent face values. The coins were minted from 2010 through 2021, when the final of the 56 designs was issued.

Your coin arrives in a protective plastic slab with the applicable labels. You won’t know until you receive the coin which labels you’re getting because this is a miscellaneous listing of MS69-graded coins. Coins may have been graded by either NGC or PCGS, and we don’t pull for those specifics. We pick the orders from available inventory at the time payment clears.

If you have any questions about ordering processes, how to complete your America the Beautiful silver coin collection or the 2010 5 oz Silver ATB Mount Hood Coin specifically, call us at 1-888-989-7223 or reach out via email or the chat box on the site. Order your Mount Hood silver quarter today while supplies last!