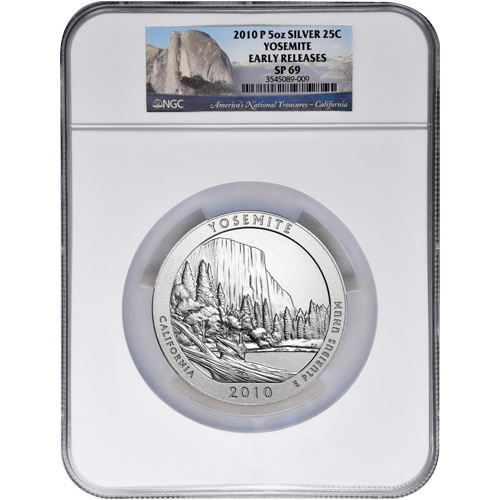 The silver for sale in the America the Beautiful Series at the United States Mint represents the largest silver blank used by the US Mint in bullion coining. The 5 oz silver coins debuted in 2010 and ran through 2021 with a total of 56 designs issued in all. Right now, 2010 5 oz Silver ATB Yosemite Coins are available to purchase online at Silver.com in near-perfect condition.

Each of the 2010 5 oz Silver ATB Yosemite Coins available in this listing come to you in near-perfect condition. The coins listed here have an SP69 certification, indicating that each one exhibits full, original mint luster and comes with no more than two minor detracting flaws. Examples of acceptable flaws at this level include only minuscule contact marks or hairlines and must be found outside of the primary fields of the coin.

The ATB Series from the United States Mint was inspired by the State Quarters program from the United States Mint. Of the jurisdictions represented in both the State Quarters circulation series and the Silver ATB bullion series, only three states had a repeat site featured. California’s Yosemite National Park is one of those three sites that repeated, though the design is different.

The obverse of 2010 Silver ATB Yosemite Coins features a portrait of President George Washington. In this left-profile relief, the first Commander-in-Chief of the Continental Army and President of the United States of America is depicted. President Washington’s bust has been on the circulation quarter since 1932 and features on all versions of the Silver ATB Series.

On the reverse side of 2010 5 oz Silver ATB Yosemite Coins is a depiction of El Capitan. A straight rock face within Yosemite National Park, the rock face reaches 3,000 feet in total from the base of the mountain to the peak.