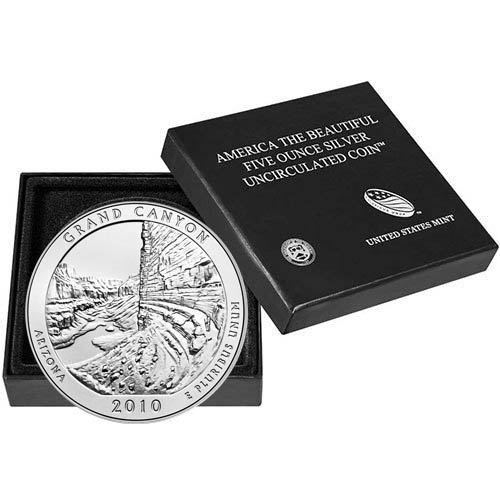 Each of the sites represented in the America the Beautiful Series from the United States Mint debuts in the order in which it was selected for preservation by the federal government. Protections for the Grand Canyon in Arizona began as early as February 1893 and the park was granted status as a National Park in February 1919, recently celebrated 100 years with that status. Today, 2010-P 5 oz Burnished Silver ATB Grand Canyon Coins are available to you online at Silver.com.

Grand Canyon National Park is found in northwestern Arizona. When it was selected as a National Park in 1919, it was the 15th site in the United States to earn the honor. Some six million recreational visitors came to the Grand Canyon in 2017, making in the second most-visited American national park behind only the Great Smoky Mountains National Park.

These 2010 Burnished Silver ATB Grand Canyon Coins are available to you individually inside of protective presentation cases and come with a Certificate of Authenticity from the United States Mint.

On the reverse of 2010-P 5 oz Burnished Silver ATB Grand Canyon Coins is that depiction of Marble Canyon. This is one of three designs in the ATB Series from the US Mint that was not changed from the state quarters program that ran from the late 1990s through the 2000s. The other repeat designs were those of Yosemite National Park in California and Mount Rushmore in South Dakota.

The obverse of 2010-P 5 oz Burnished Silver ATB Grand Canyon Coins includes the bust of President George Washington. This image was created in 1932 by John Flanagan for use on the circulating quarter. It was based on a sculpted bust created in 1786 by William Cousins.

Please feel free to reach out to Silver.com customer service with any questions. You can call us at 888-989-7223, chat with us live online, or simply send us an email.