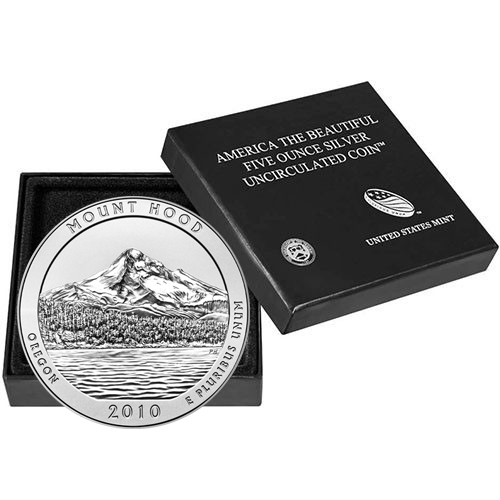 Mount Hood is a strato volcano in the US state of Oregon which is considered a “potentially active” natural structure. The snow-capped peak is the highest natural point in Oregon and the fourth highest in the Cascade Mountain Range along the United States west coast. The 2010-P 5 oz Burnished Silver ATB Mt. Hood Coins are currently available to you for purchase online at Silver.com.

The design of the 2010 Mount Hood Silver Coin features the image of Lost Lake and Mount Hood. Located in Hood River County, Oregon, the lake is fed by various intermittent creeks and is bounded on either side by Lost Lake Butte and Preachers Peak, both of which rise more than 4,400 feet high.

On the reverse of 2010-P 5 oz Burnished Silver ATB Mt. Hood Coins is the image of Lost Lake in the foreground. The massive heights of Mount Hood dominate the background field, rising high above the peaks of Lost Lake Butte and Preachers Peak.

The obverse of 2010 Burnished Silver ATB Coins includes the left-profile portrait of President George Washington. The nation’s first president, Washington has been on the circulation quarter since 1932 when his depiction was placed there in honor of his 200th birthday.

We encourage Silver.com customers to call us at 888-989-7223. You can also connect with us online through our live chat and email address. The price of silver per ounce is always available to you on our website.