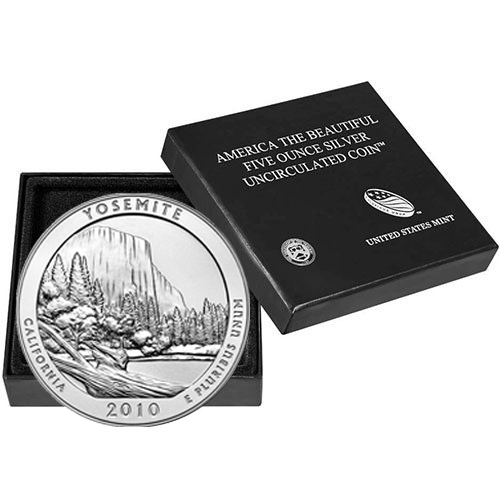 The America the Beautiful coin program is a popular 56-coin series from the United States Mint. Introduced in 2010, there are five design releases per year in this collection which is set to run through 2021. Each design in the collection features an investment-grade silver bullion coin and a collectible burnished silver coin. Right now, 2010-P 5 oz Burnished Silver ATB Yosemite Coins are available to purchase online at Silver.com.

Each of the 2010-P 5 oz Burnished Silver ATB Yosemite Coins in this product listing comes to you from the United States Mint with its original display box and an included Certificate of Authenticity.

The ATB Series of silver coins reflects the popularity of the State Quarters program, which featured unique designs on the reverse of circulation quarters to represent each state. Though most states and territories have new parks or locations in the ATB Series, California is one of three which features the same site on the ATB coins. However, the design of Yosemite National Park for the ATB coins is different than that used in the State Quarters program.

On the reverse of 2010-P 5 oz Burnished Silver ATB Yosemite Coins, you’ll find the image of El Capitan. The granite monolith rises up to 3,000 feet in height from its base to its summit. El Capitan is located along the north side of the Yosemite Valley within the park.

Yosemite National Park was not the first official national park in the US, but it was the first instance of park land being set aside for preservation. President Abraham Lincoln signed the Yosemite Grant in June, 1864 to protect the land and pave the way for the 1872 creation of Yellowstone National Park as the nation’s first such park.

The obverse of 2010-P Burnished Silver ATB Yosemite Coins features the left-profile portrait of President George Washington. The bust was created in 1932 by John Flanagan and features on the obverse of circulation quarters.

If you have any questions, please feel free to reach out to Silver.com. You can contact us at 888-989-7223, chat with us live online, or simply send us an email.