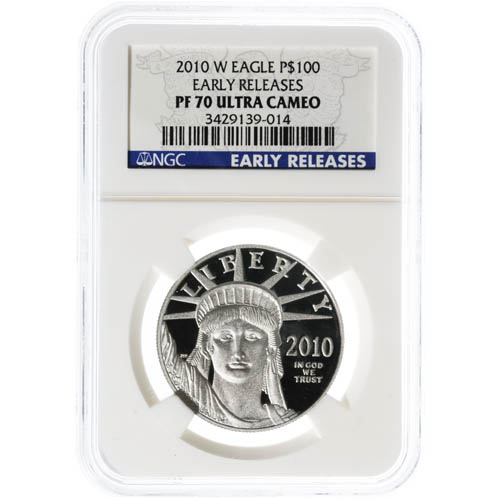 Proof Platinum Eagle Coins from the United States Mint have gone through various design programs over the course of time. Since 1997, the series has featured five distinct design programs meant to reflect everything from American geography and natural wonders to the foundations of the country’s government and its founding documents.

The longest of these series was the Preamble to the Constitution. Introduced in 2009, the program ran through the 2014 release and featured six different designs focusing on the core concepts laid out by the Founding Fathers in the United States Constitution. The 2010 Proof Platinum Eagle was the second coin in this series and focused on “To Establish Justice.”

On the reverse of the 2010 1 oz Proof Platinum Eagle is the image of a blindfolded Justice figure holding the scales of law in one hand, with oak and laurel branches in the other. The blindfold and scales are universal images for the concept of impartial justice and this design was created for the 2010 Proof Platinum Eagle by Donna Weaver.

These 2010-W 1 oz Proof Platinum American Eagle Coins are available to you in perfect condition from the NGC. PF70 coins showcase full, original mint luster and no detracting flaws. UCAM stands for ultra-cameo and indicates the coins have strong, frosted elements with deeply-mirrored, clear backgrounds. The Early Release label is for coins received by the NGC within the first 30 days of the 2010 release.

We encourage Silver.com customers to call us with questions at 888-989-7223. You can also chat with us live online or simply send us an email with your inquiries.