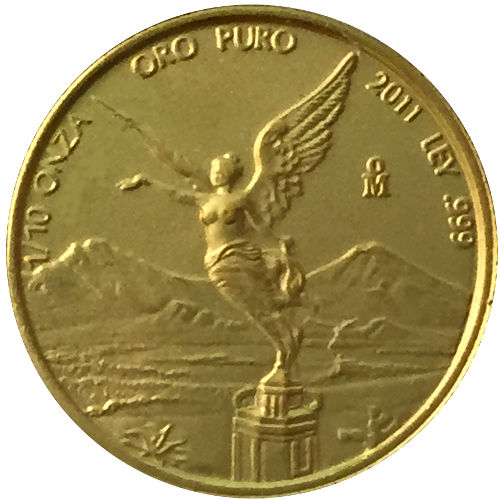 Investors looking for precious metal coins often turn to sovereign coins because of their government-backed metal content and impressive purity. The Gold Mexican Libertad is a rising star in the world of precious metals, garnering increased attention across North America from numismatics. Right now, you can purchase a 2011 1/10 oz Gold Mexican Libertad Coin from Silver.com.

Gold Mexican Libertad coins are the official bullion coin of the Mexican government. While its counterpart, the Silver Libertad, has been struck annually in at least one weight since 1982, the Gold Libertad had an inconsistent start. Struck for the first time in 1981, the Gold Libertad was also struck from 1991 to 1994, and again in 2000, before entering regular production in 2002.

On the obverse side of these 2011 1/10 oz Gold Mexican Libertad coins are the iconic images of the angel of independence, and the twin volcanic mountains of Popocatepetl and Iztaccihuatl. All three images appeared on the original Centenario coin, originally struck from 1920 to 1947.

The reverse side of the coin bears the coat of arms for Mexico. Designed following the nation’s independence from Spanish colonial rule, the seal features an eagle (Mexico’s national symbol) perched atop a cactus as it does battle with a serpent.

The Mexican Mint was first founded in 1535 when Spanish conquistadors discovered the vast wealth of gold and silver in Central America. Seeking an easier form to transport this wealth back to Spain, the conquistadors established what is today known as the Mexican Mint.

If you have questions about these gold bullion coins, don’t hesitate to contact a Silver.com associate at 888-989-7223. We’re also available online through our live web chat and email services. If you are interested in similar products, be sure to check out our full collection of Mexican Mint coins.