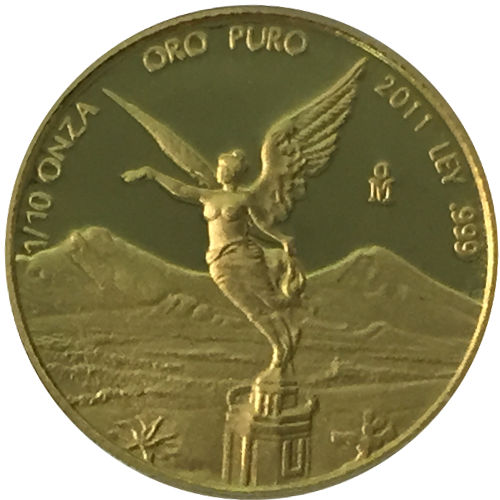 When it comes to collecting coins, numismatics prefer the visual brilliance of proof coins to bullion versions. The Proof Gold Mexican Libertad Coin is gaining notoriety and attention in North America, with collectors coveting the historic design sets and government-backed purity of the coin. Right now, the 2011 1/10 oz Proof Gold Mexican Libertad is available to you on Silver.com.

The Gold Libertad coin is the direct successor of the historic Centenario. The Mexican Mint first struck the Centenario in 1920 as part of the country’s centennial celebration of its independence. That coin was struck from 1920 to 1947, and from 1949 to 1972 as a reproduction.

In 1981, the modern Gold Libertad was introduced in bullion, with a proof available for the first time in 1989. All Gold Mexican Libertad coins feature design sets inspired by the Centenario, with Winged Victory and the coat of arms serving as the primary design motif.

On the obverse side of the 2011 1/10 oz Proof Gold Mexican Libertad coin is the likeness of the angel of independence. Known as Winged Victory, she is depicted in a similar fashion as the statue which stands in the center of Mexico City. The wreath in her right hand and broken chains in her left symbolize Mexico’s freedom following the end of Spanish colonial rule.

The reverse shows the coat of arms for Mexico. While the 1 oz coin features multiple historic versions of the seal, as well, the fractional weight coins only display the modern version. It is surrounded by a wreath below the emblem, and “Estados Unidos Mexicanos” above.

Founded in 1535 by Spanish conquistadors, the Mexican Mint is the oldest operating facility in North America. It predates by more than 250 years the United States Mint, and is almost 500 years older 400 years older than the Royal Canadian Mint.

If you have questions, don’t hesitate to contact a Silver.com associate at 888-989-7223, online through our live chat, or via email. If you are looking for similar products, be sure to check out our full selection of Mexican Mint coins.