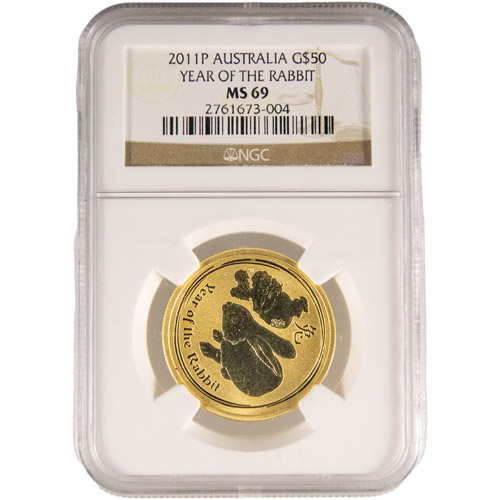 According to the Chinese Calendar, there are twelve lunar animals that repeat in cycles every twelve years. These are also known as zodiac signs, and each one has its own unique qualities. Per legend, The Jade Emperor held an animal race to determine who would be his official guards. Coming in 4th place was the rabbit. As such, the rabbit is known as the 4th zodiac animal. Now, 2011 1/2 oz Gold Australian Year of the Rabbit Coins in near-perfect condition are available to you for purchase online at Silver.com.

All 2011 1/2 oz Gold Year of the Rabbit Coins in this listing were originally produced by the Perth Mint. They were then sent to NGC for grading, where they received the official designation of Mint State 69. The highest grade a coin can receive is Mint State 70, so these coins will be in almost perfect condition. When you order this specimen, it will arrive inside a plastic slab from NGC with the grade listed on the label.

Queen Elizabeth II features on the obverse side of 2011 1/2 oz Australian Year of the Rabbit Coins. Her Majesty is depicted in right-profile relief with the Girls of Great Britain and Ireland Tiara resting atop her head. Also included are the words Elizabeth II, Australia, 1/2 oz .9999 Gold 2011 50 Dollars.

The Lunar Rabbit is depicted on the reverse of 2011 Gold Australian Year of the Rabbit Coins. This creature is shown facing to the left with a cabbage sitting by its side. Above the cabbage is a Chinese pot. An inscription of the Chinese rabbit zodiac sign and the words Year of the Rabbit are included.

One of the more intriguing aspects of the Chinese Calendar is the element theory that goes along with twelve animals. Each zodiac sign has a representative element that cycles through every 60 years. The 5 elements include metal, wood, fire, water, and earth. 2011 happened to be the metal Rabbit year. As such, there won’t be another Year of the Rabbit like this one until 2071.

Silver.com customer service is available to assist you at 888-989-7223. Additionally, you can chat with us live online or email us directly when you buy gold online.