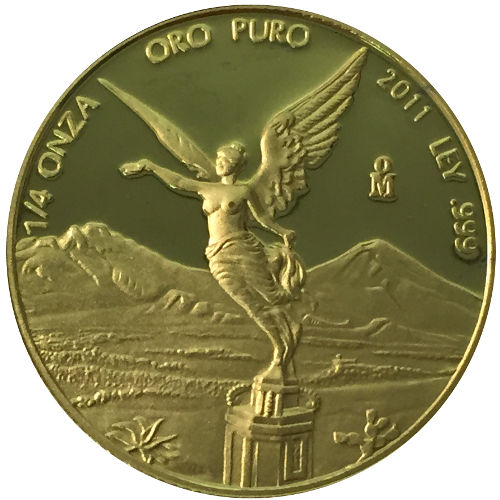 Sovereign coins are popular choices among investors and collectors because of the guaranteed purity and content of the coins struck at national mints. The Mexican Mint’s Proof Gold Mexican Libertad is an increasingly popular choice, but is available in limited quantities each year. Right now, you can add the 2011 ¼ oz Proof Gold Mexican Libertad to your collection courtesy of Silver.com.

Gold Mexican Libertad coins were introduced in spurts over the past three decades. The first proof version of the official sovereign coin was a ½ oz coin struck just once, in 1989. Regular production for Proof Gold Mexican Libertads began in 2004, with all five current weights struck starting in 2005.

The proof version of the Gold Libertad is available in a total of five weights. In addition to the ¼ oz, which is the most popular weight, there is a 1/20 oz, 1/10 oz, ½ oz, and 1 oz coin produced each year. Mintage is strictly limited each year by the Mint, with 2011 featuring one of the highest mintage levels in recent years.

On the obverse of each is the image of Winged Victory. A symbol of Mexican independence, she is featured in the foreground, with the twin volcanic peaks of Popocatepetl and Iztaccihuatl in the background.

The reverse of Gold Libertad coins bears the coat of arms of Mexico. In the image, used since the country gained independence from Spain, an eagle is locked in battle with a serpent atop its perch on a cactus branch.

Each year the Mexican Mint produces the proof version of the Gold Libertad using a special coining process. Unique planchets are loaded into the coining press and struck multiple times with brand-new die casts, creating a stark contrast between the design field and background.

We encourage all Silver.com customers to ask questions when they arise. You can reach out to our team members at 888-989-7223, connect with us online through our live web chat, or send us your questions in an email. If you are looking into similar products, be sure to check out our full collection of Mexican Mint coins.