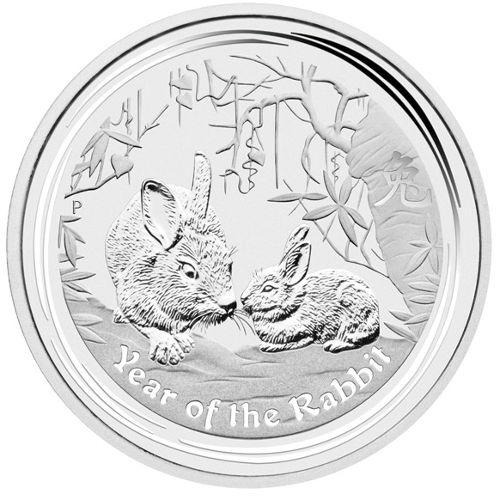 These 1 Kilo Silver Australian Rabbit coins feature the unique Year of the Rabbit design on the reverse. In the image, an adult rabbit and young bunny are featured amidst a thicket of branches and shrubs in the wild. Engravings on this face include the Chinese symbol for rabbit, as well as the “P” mint mark of the Perth Mint and the phrase “Year of the Rabbit.”

On the obverse you’ll find Ian Rank-Broadley’s effigy of Queen Elizabeth II. This depiction of Her Majesty in right-profile relief has appeared on commonwealth currency, including Australian coins, since 1998.

Australia’s Perth Mint is a vestige of the former Royal Mint system established under British colonial rule. Established in 1898, control of the Perth Mint transferred to the government of Western Australia in 1970 and remains a separate entity outside the Royal Australian Mint system formed after independence.

If you have questions, please contact Silver.com at 888-989-7223. You can also chat with us live online or submit your questions to us in writing via email.