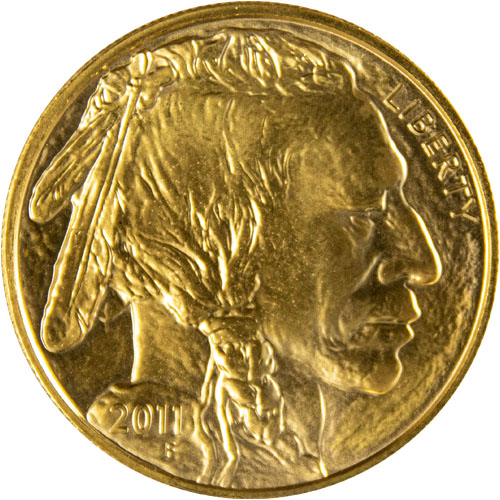 If you enjoy the famous Buffalo nickel design, then the American Gold Buffalo coin is just for you. This coin, which was first released in 2006, bears the same design originally created by James Earle Fraser on those iconic American nickels. On the front is a Native American, and on the back is a mighty bison. Collectors and investors also appreciate this gold coin for its .9999 purity. Now, 2011 1 oz Gold American Buffalo Coins are available to you online at Silver.com.

The Presidential $1 Coin Act of 2005 introduced the American Gold Buffalo for a few reasons. One was that the country felt the need to bring new life to American coinage while also having a coin struck in 24-karat gold. Another reason though was the desire to resurrect a design that for many encapsulates the American spirit and ethos. This would be the Buffalo nickel by James Earle Fraser. The images of a Native American chief and a bison are engrained in the minds of many, and their appearance on the Gold Buffalo would help to ensure they would remain relevant for future generations, too. So far, the plan has worked. The Gold Buffalo is one of the most sought-after products the US Mint releases each year.

An indigenous tribal figure is featured on the obverse design of 2011 1 oz American Buffalo Coins. This image is the same one found on the copper five-cent nickels released between 1913 and 1938. It is a stunning image that suggests a deep reverence towards the Native American chief. The date of 2011 and the word Liberty are also shown on the obverse side.

A bison is depicted on the reverse of 2011 1 oz Gold Buffalo Coins. He is seen looking to the left and standing atop a mound of dirt with his head slightly bent. This image is meant to represent the historical westward spirit of the United States. You’ll find the words United States of America, E Pluribus Unum, and In God We Trust located on this side. The weight, purity, and denomination are also listed.

All 2011 Gold American Buffalo Coins have been struck directly at the United States Mint. When these coins were minted, they represented the 6th year of release in the American Gold Buffalo program. When shipping, we include individual coins inside a plastic flip. Multiples of 20 will arrive inside tubes.

Please feel free to reach out to Silver.com with any questions when buying gold. You can contact us at 888-989-7223, online using our live web chat feature, or via our email address.