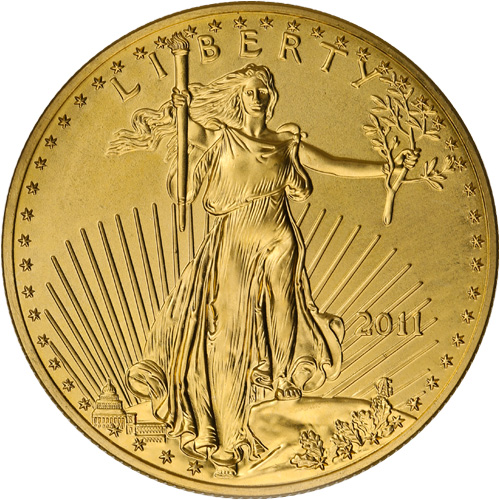 The Great Recession brought revived fortunes for the United States Mint and its Gold American Eagle coin program. Although the 2011 release of the coin showed decline from the previous two years during the height of economic calamity, it was still one of the highest mintage figures in program history. Right now, 2011 1 oz Gold American Eagle coins are available to purchase online at Silver.com.

When you purchase the 2011 1 oz Gold American Eagle from Silver.com today you receive a coin in BU condition. Coins in this condition exhibit no signs of wear and tear, however, you’ll notice the presence of minor flaws such as breaks in the luster, spotted surfaces, and contact marks from the coining process.

Mintage of the 2011 Gold Eagle 1 oz gold coin was down by just under 300,000 coins from 2010. All coins in the gold bullion series suffered drops as the Great Recession eased and gold prices continued to rise, pushing some investors out of the market as gold set new record highs during the year.

The price of gold rose during 2011 from an initial level of $1,388.50 to a new all-time high of nearly $1,900 per ounce in September. Gold would eventually drop back down to close the year at $1,531 per ounce, but it was still a gain on the year and marked the 12th consecutive year of gains for gold prices.

On the obverse, Augustus Saint-Gaudens’ image of Liberty graces the Gold American Eagle. Originally developed in 1907 for the $20 Gold Double Eagle, this design was chosen and refined in 1986 for the Gold Eagle. Two stars were added around Liberty’s figure to reflect the now 50 states in the Union, compared to 48 states when the Gold Double Eagle exited circulation in 1933.

The reverse features an exclusive design from Miley Busiek. An accomplished artist and engraver with public and government works to her credit, she created the image of a nesting family of bald eagles to be used exclusively on the reverse of the Gold American Eagle coin.

If you have any questions, please feel free to reach out to Silver.com. Our customer service team is available at 888-989-7223, online using our live web chat feature, or via our email address.