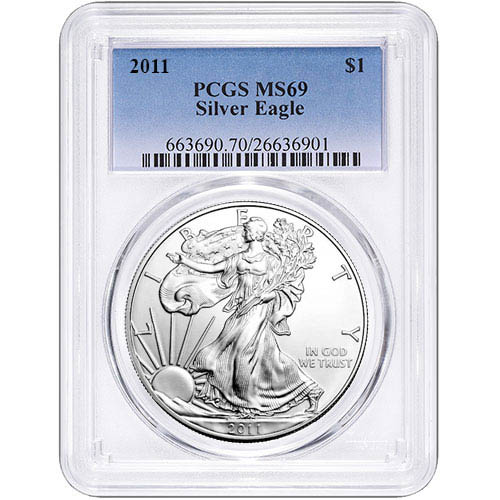 2011 marked the fourth straight year in which the Silver American Eagle coin set a new mintage record. For the first time in the program’s history, the coin crossed the 40-million mark in a single year of release. Right now, 2011 1 oz Silver American Eagle Coins are available to purchase online at Silver.com with a PCGS certification.

Each 2011 1 oz Silver American Eagle in this product listing comes with a near-perfect grade from the PCGS. Coins with a Mint State 69 certification exhibit full, original mint luster with no more than two minor detracting flaws present on the coins. Acceptable flaws at this level include minuscule contact marks or hairlines.

On the obverse of Silver American Eagle coins is the image of Walking Liberty. The design was created in 1916 by Adolph A. Weinman and featured on the half-dollar until 1947. The reverse face of the coins includes the heraldic eagle of the United States. This design was modernized in 1986 by John Mercanti.