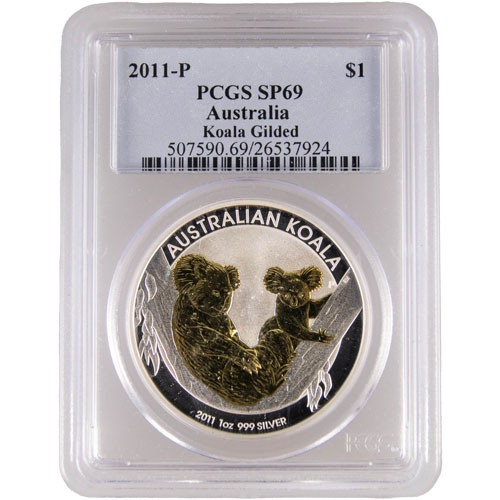 One of the most popular animals in Australia is the koala. This special coin release for 2011 features imagery of the koala that holds special meaning for the Australian continent. Released from the Perth Mint, the Australian Koala Coin collection has seen immense success over the years it’s been in production. Each year, this collection has featured exclusive designs for coin collectors and investors around the world to enjoy. Right now, the 2011 1 oz Silver Australian Koala Coin PCGS SP69 Gilded can be purchased online from Silver.com.

Struck in 99.9% fine silver, the 2011 1 oz Silver Australian Koala Coin PCGS SP69 Gilded is considered a full legal tender under the Australian government. This coin features a gilded quality, meaning that certain elements of the design have thin layers of 24-karat gold, making this release truly special. A grading of SP69 has been given to this coin by the PCGS, which means that it’s considered a near-perfect specimen with no more than two minor flaws. These flaws are typically minuscule contact marks or hairline markings that are located outside the coin’s central focal point.

The Perth Mint first released the Australian Silver Koala Coin series in 2007. 2011 marks the fourth year of production for these bullion products. Over the last few years, these coins have helped to represent some of Australia’s most significant wildlife, with the koala being the center point of this collection.

The obverse of the 2011 1 oz Silver Australian Koala Coin PCGS SP69 Gilded features the right-facing portrait of Queen Elizabeth II. The effigy of the Queen has been used on many coin releases from different mints around the world to honor her as a historical figure and renowned leader. The obverse for this 2011-coin release shows Queen Elizabeth II wearing a magnificent crown.

On the reverse of the 2011 1 oz Silver Australian Koala Coin PCGS SP69 Gilded is an image of a koala family sitting up in a tree. This reverse design has intense detail, so the viewer is able to clearly see the koalas’ furry ears, rough skin, and other fur patches. The reverse also shows the “P” mint mark for the Perth Mint, as well as the coin’s weight and purity.

If you have any additional questions when buying silver, our team at Silver.com is here to help. Contact us today via email, online live chat, or by phone at 888-989-7223.

Images shown are examples only. Actual item appearance is subject to change, but will always correlate with title and