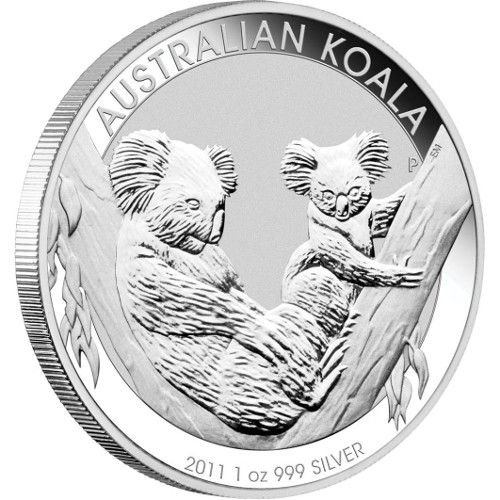 Silver Australian Koala coins were first introduced in 2007 in a 1 oz weight only. The massive popularity of the coin following that first year led to the program’s expansion in 2008, when a ½ oz, 10 oz, and 1 Kilo coin were added to the program. Today, the Perth Mint strikes Silver Australian Koala coins in a bullion version for all four weights, with a new design introduced on the reverse each year.

The alternating designs featured on the reverse always use the same motif as inspiration, that of the nation’s beloved marsupial. Koalas are native to Australia and not found in nature outside of the continent. Although they are often viewed as cuddly creatures, the koala can actually defend itself aggressively when threatened.

On the reverse side of each of these 2011 1 oz Silver Australian Koala coins is the image of a mother koala and a young koala resting in the crook of a tree. True to the nature of any parent-child relationship, the young koala is alert and awake, while the mother enjoys a restful nap.

The obverse side of the coin bears Ian Rank-Broadley’s right-profile portrait of England’s Queen Elizabeth II. Her Majesty’s effigy is surrounded by engravings that include her name, the nation of issue, and the coin’s face value. Each coin in this product listing is in Brilliant Uncirculated condition, meaning that it shows no signs of wear and tear.

Australia’s Perth Mint is a state-owned entity of Western Australia. Although it is not affiliated with the Royal Australian Mint, under the Currency Act of 1965, all of its coins are considered legal tender in Australia.

If you have questions about these coins, a Silver.com associate is ready to help. You can reach us at 888-989-7223, online through our live chat, and via email. If you are interested in similar products, be sure to check out our selection of Perth Mint Products.