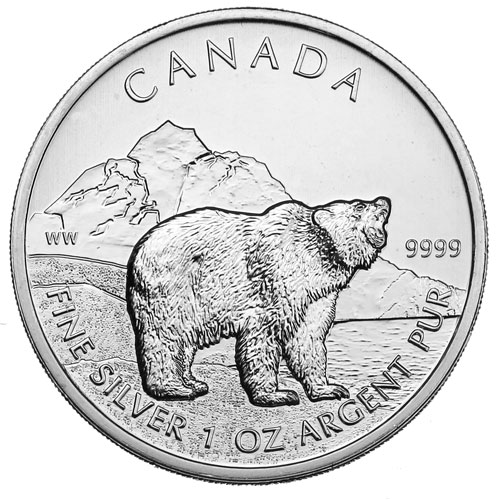 Any quantity available for $12.09 per oz over spot!

There are few creatures in this world with the toughness and fierce nature of the grizzly. Both feared and respected by mankind, grizzly bears roam a large swath of the Rocky Mountains as they stretch along the backbone of North America. Today, 2011 1 oz Silver Canadian Grizzly Coins are available from Silver.com.

Grizzly bears are among the fiercest predators in North America. Their size, relative speed, and ferocity makes them extremely dangerous when they are encountered in the wild and feel threatened. Grizzly coins are part of the Canadian Wildlife Series. The grizzly was released during the first year of the series, and was second to coins featuring timberwolves.

On the reverse side of each coin is the image of a ferocious grizzly bear. Standing alone, with the Canadian Rockies in the background, the bear unleashes its fearsome roar into the Canadian wilderness. Engravings include “Canada,” “9999,” the metal content, and weight of the coin. A special “WW” engraving honors William Woodruff, the man behind the design.

The obverse side bears the image found on all Canadian coins. Queen Elizabeth II’s right-profile portrait, designed in 2003 by Susanna Blunt, is featured in the center. Engravings on this side include “Elizabeth II,” “5 Dollars,” and “2011.”

The Royal Canadian Mint was established in 1908 to process the gold, silver, and other precious metals discovered in the Yukon Territories. Operating facilities in Winnipeg and Ottawa, RCM has produced precious metals ranging from gold bars to pay off World War I debt and winner’s medals for the 2010 Winter Olympics in Vancouver.

If you have any questions for Silver.com about this product listing, we encourage you to contact one of our associates. You can reach our team members at 888-989-7223, connect with us live through our web chat, or send us an email.