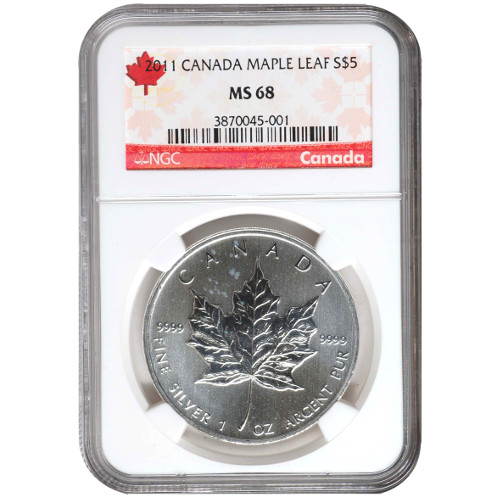 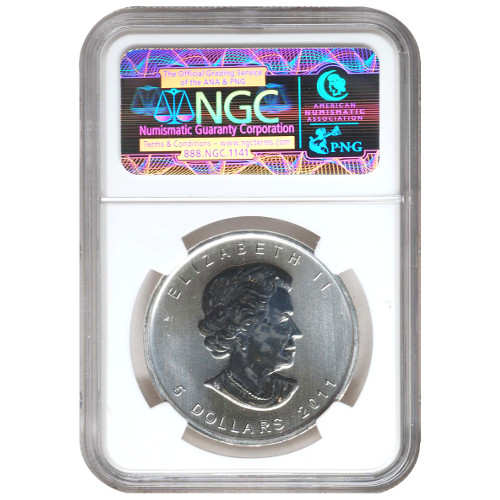 The maple leaf is one of the most easily recognized symbols of the nation of Canada. While many people would associate the ruggedness of the Rocky Mountains or the harshness of the frozen tundra with Canada, it is the maple leaf that has been adopted as a national logo. The NHL franchise in Toronto wears the maple leaf as its logo, while the national flag bears a giant red leaf at its center. The Royal Canadian Mint produces the Silver Canadian Maple Leaf coin as the official silver bullion coin of the Canadian government.

Blunt’s image of Queen Elizabeth II is featured on the obverse side of the coin. The image of Her Majesty, a right-profile design, has changed little over the years. The only changes made to her image include efforts to accurately reflect her age during her reign as Queen. Her image is surrounded by engravings of “Elizabeth II” and the year of minting.

On the reverse side, the image of the maple leaf endures. The only changes made over time have been in an effort to enhance the level of detail in the leaf’s appearance. The image is surrounded by engravings of “Canada,” the purity of the coin, and the phrase “Fine Silver 1 oz Argent Pur.”

The Royal Canadian Mint operates from its headquarters in Ottawa, Ontario, Canada. The organization is responsible for minting all circulation currency for the government of Canada. These 2011 1 oz Silver Canadian Maple Leaf coins have been graded MS68 by the Numismatic Guaranty Corporation. An MS68 coin has attractive, sharp strike and full original luster for the date and mint mark, with no more than four marks or flaws.

Silver.com mails all products in secure wrapping and ships them in discreet packaging. If you have any questions or concerns before ordering the 2011 1 oz Silver Canadian Maple Leaf Coins NGC MS68, simply call Silver.com at 1-888-989-7223. We can also be reached through the live chat feature located on our contact page or by email.