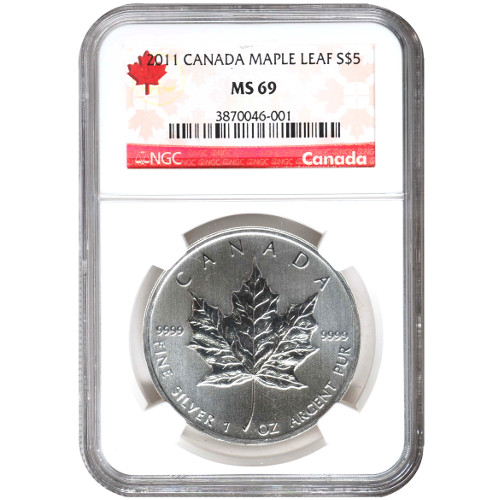 The maple leaf is one of the most beloved images of the Canadian nation. Used by professional sporting organizations, government agencies, and the Royal Canadian Mint, the maple leaf is a popular symbol for Canada. Since 1988, the Royal Canadian Mint has produced the Silver Maple Leaf as the official silver bullion coin of the government of Canada. These 2011 1 oz Silver Canadian Maple Leaf coins are available with an MS69 grade that has been certified by the Numismatic Guaranty Corporation.

On the obverse side of the coin, Blunt’s right-profile image of Queen Elizabeth II is featured in the center. Her image is surrounded by the engravings “Elizabeth II” and the year of minting for the particular coin. Blunt’s image of Her Majesty has been updated only twice since its original design was unveiled. Both changes were made to reflect the Queen’s age during her reign. The image of the maple leaf has changed little over the years, with any changes offering improvements in the detail of the image.

The reverse side of the coin features the RCM engravers’ image of the maple leaf. The image is surrounded by the engravings “Canada,” “.9999,” and the phrase “Fine Silver 1 oz Argent Pur.” These 2011 1 oz Silver Canadian Maple Leaf coins have been graded MS69 by the NGC. This grade indicates a coin with sharp, attractive strikes of the mint and year marks on the coin, with no more than two flaws or scratches on the coin.

If you have any questions before ordering your 2011 1 oz Silver Canadian Maple Leaf Coins NGC MS69, please call Silver.com at 1-888-989-7223. We can also be reached online through live chat and email. Make sure you look over our entire collection of Silver Maple Leafs for more grades and years of these coins.