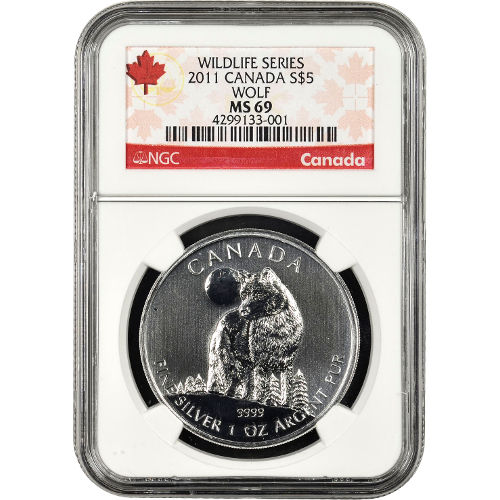 The Royal Canadian Mint is famous for producing the Canadian Maple Leaf series of bullion coins. It has also struck a number of other popular coin programs in its history, and few were more popular than the Canadian Wildlife Series. A six-coin series released between 2011 and 2013, each design featured a new animal from the wilds of Canada on a brilliant .9999 pure silver coin. Right now, the 2011 1 oz Silver Canadian Wolf Coin is available in near-perfect condition on Silver.com.

Canadian Wildlife Series coins were released on a two-coin schedule over the course of a three-year period. The first coin was this 2011 1 oz Silver Canadian Wolf, followed in order by the grizzly bear (2011), cougar (2012), moose (2012), pronghorn antelope (2013), and wood bison (2013). Royal Canadian Mint Assistant Engraver William Woodruff designed the 2011 and 2012 coins, while Canadian artist Emily Damstra handled both 2013 designs.

Each 2011 1 oz Silver Canadian Wolf coin available today from Silver.com has a near-perfect grade of Mint State 69. According to the NGC, coins in this condition have their full, original mint luster, and no more than two minor detracting flaws on the surface.

The reverse features the over-sized image of timber-wolf in the Canadian wilderness. Engravings that accompany the design include the nation of issue and purity of the coin, as well as the weight of the coin and metal content in both English and French.

On the obverse is the right-profile portrait of England’s Queen Elizabeth II. This particular depiction is the third-generation depiction of the Queen to grace Canadian coinage.

The Royal Canadian Mint was founded in 1908. Its original facility still operates in the federal capital of Ottawa, while a second modern facility was opened in Winnipeg in the 1980s.

Please direct all of your questions to a Silver.com associate at 888-989-7223. You can also find us conveniently online using our live chat feature or email. 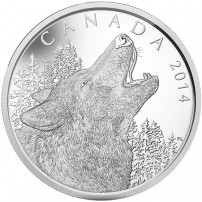