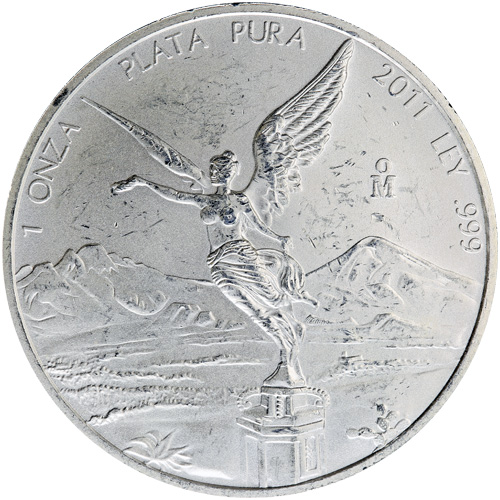 The Silver Mexican Libertad coin has grown to become one of the more popular coins in the world, and certainly across North America. Investors turn to this coin for its government-backed purity, as well as the value inherent in owning a coin with low mintage levels and limited availability. The 2011 1 oz Silver Mexican Libertad Coin is available online now at Silver.com.

Silver Mexican Libertad coins are unique in the bullion industry. While the coins do not have an official face value engraved upon them, they do have legal tender status in Mexico. The Banco de Mexico issued a floating face value, meaning the coin’s legal tender value fluctuates based upon market conditions and could change from one day to the next.

Winged Victory may have first appeared on the gold Centenario in 1921, but it dates back much further than that. The image originated during Mexico’s struggle for independence from Spain. Her image is representative of the nation’s success, with one hand holding the broken chains of slavery and the other lifting a wreath crown toward the sky as a symbol of free governance.

On the obverse of each 2011 1 oz Silver Mexican Libertad coin you’ll find a key symbol from Mexico’s fight for independence: Winged Victory. Her image stands in the center of Mexico City today atop the Victoria of Mexican Independence Victory Column, where it was erected beginning in 1921 to coincide with the centennial of independence and the release of the Centenario.

The reverse of the 2011 1 oz Silver Mexican Libertad coin features the modern Mexican coat of arms, which features a bald eagle doing battle with a serpent. The image symbolizes Mexico’s fight to rid itself of Spanish colonial rule.

Each of the 2011 1 oz Silver Mexican Libertad coins in this product listing earned a BU grade. Coins in Brilliant Uncirculated condition feature no signs of wear and tear, however they may include breaks in the luster, spotted surfaces, or contact marks from the coining process as minor flaws.

The Mexican Mint strikes the Silver Mexican Libertad for the federal government under the oversight of the Banco de Mexico. Founded in 1535, it is the Western Hemisphere’s oldest minting facility and once minted coins used throughout the Spanish Empire’s western colonies.

We encourage all Silver.com customers to reach out to us with questions. You can reach our customer service team at 888-989-7223, connect with us online through our live chat, or simply email us.