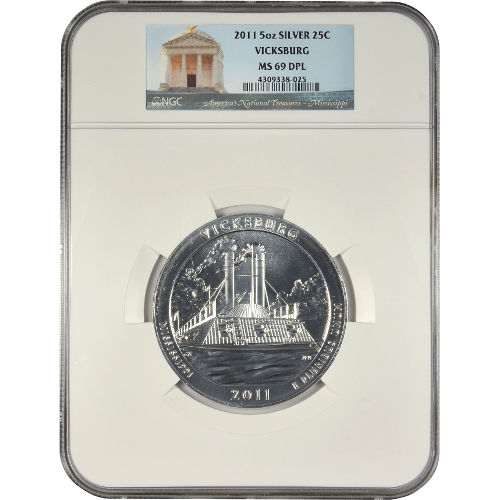 The Battles of Vicksburg was one of the most decisive in the American Civil War. Taking place over the course of 43 days outside of Vicksburg, Mississippi, the outcome would play a significant role in the war’s conclusion. The site is remembered today as the Vicksburg National Military Park, and commemorates the state of Mississippi in the ATB Series from the US Mint. Right now, 2011 5 oz Silver ATB Vicksburg coins are available as near-perfect specimens on Silver.com.

Union victory at the Battle of Vicksburg, a 43-day siege that allowed the Union to take control of the Mississippi River from north to south, enabled the US to cut the Confederate States of America in two sections and eventually tighten its stranglehold on the South.

America the Beautiful is a 56-coin series from the United States Mint that celebrates a national park, national forest, or historic monument from each of the country’s 50 states, 5 overseas territories, and the federal district of Washington DC.

Each coin in this Silver.com product listing has a near-perfect grade of Mint State 69 from the NGC. Coins in this condition are near perfect, with full, original mint luster and a maximum of two minor detracting flaws. The DPL designation identifies this bullion coin as one with a deeply-mirrored, proof-like finish.

On the reverse is the image of a Union ironclad as it fights for control of the Mississippi River against Confederate forces in the Battle of Vicksburg. The state of issue, park name, and year of issue are included as engravings.

The obverse bears the left-profile portrait of President George Washington. Commonly featured on all ATB coins and the circulation quarter in the US, this was refined in 1932 by John Flanagan based upon a 1786 bust of the president by William Cousins.

If you have questions, please contact Silver.com on the phone at 888-989-7223. You can also reach us online using our live web chat and email features.