America was formed in the crucible of conflict. The short, but rich, history of the United States is captured in stunning silver on the America the Beautiful coin series from the United States Mint. One of the most important battles in American history occurred in Vicksburg, Mississippi during the Civil War. This battle is reflected on the ATB Vicksburg Silver coin. Today, you can purchase a 2011 5 oz ATB Vicksburg Silver coin from Silver.com.

During the American Civil War, a primary goal of the Union forces was to blockade the Confederacy on all sides. A coastal blockade was easy for the Union to achieve due to its superior naval forces, but blockading the Confederacy on land required capturing the Mississippi River. Vicksburg National Military Park in Mississippi was established in memory of the 47-day siege of Union forces on Confederate troops.

Victory at Vicksburg allowed the Union to cut off the Confederacy along the Mississippi River and eventually win the war. Today, 17,077 Civil War soldiers are buried in the hallowed grounds of Vicksburg. The America the Beautiful coin series honors crucial moments, places, and people in American history. The ATB Vicksburg coin is the 9th in the series. The coins available in this listing were struck using .999 fine silver and carry a face value of $.25.

On the reverse side of the coin is the image of the U.S.S. Cairo, one of the ironclad gunboats of the Union Navy that fought in the battle at Vicksburg along the Yazoo River. Today, it is on display at the Vicksburg National Military Park.

The obverse side of the coin bears the traditional left-profile portrait of President George Washington found on all quarter-dollar coins. The President’s image is surrounded by the engravings “United States of America,” “In God We Trust,” “Liberty,” and the face value of the coin.

The United States Mint is one of the oldest facilities in the Western Hemisphere, having been founded in 1792 by an act of Congress. The Mint struck only 58,100 of the 5 oz. Silver ATB Vicksburg coins, so there is no time to waste in capturing one of these brilliant coins.

If you have questions for Silver.com, don’t hesitate to contact our associates. You can reach us at 888-989-7223, using our live web chat, or via email. 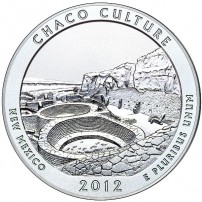