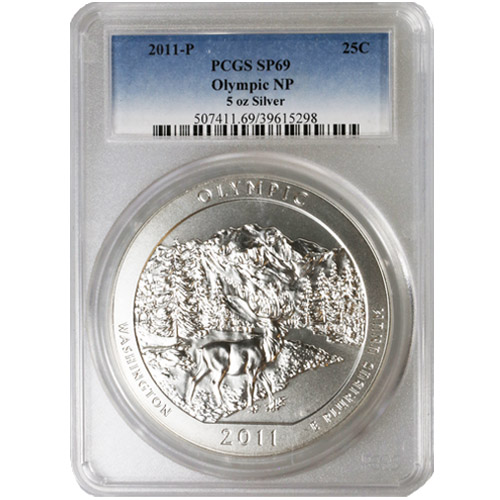 Named for the peninsula that it encompasses along the northwest coast of the United States, Olympic National Park is one of the oldest national preserves in the country. The land was first set aside for protection in February 1897, and was later established as a federally-protected site during the administrations of both President Theodore Roosevelt and President Franklin D. Roosevelt. Right now, near-perfect 2011 5 oz Burnished Silver ATB Olympic Coins are available to purchase online at Silver.com.

Each of the 2011 5 oz Burnished Silver ATB Olympic Coins available in this listing have near-perfect certifications from the PCGS. Coins with the unique SP69 grade exhibit full, original mint luster and have a maximum of two minor detracting flaws. Acceptable flaws at this grade level include only minuscule contact marks or hairlines. Additionally, those flaws must be located outside of the primary focal points of the coin.

Olympic National Park was first established under federal protection in 1909 during the administration of President Theodore Roosevelt. He designated the park as Mount Olympus National Monument in March of that year. In June 1938, Congress and President Franklin D. Roosevelt made the site a National Park.

The obverse of all 2011 5 oz Burnished Silver ATB Olympic Coins comes with a depiction of President George Washington. The first-ever President of the United States, Washington is shown here in a modernized depiction of the 1932 Quarter design that first saw President Washington appear on national coinage.

On the reverse side of 2011 Burnished Silver ATB Olympic Coins is an image of the wilderness within Olympic National Park. The scene that plays out in front of you is one that includes a Roosevelt elk standing near the banks of a river that runs off into the distance toward the peak of Mount Olympus.

If you have any questions when you buy silver, Silver.com customer service is here to help out. Our team is available to you on the phone at 888-989-7223, online through our live chat, and using our email address.