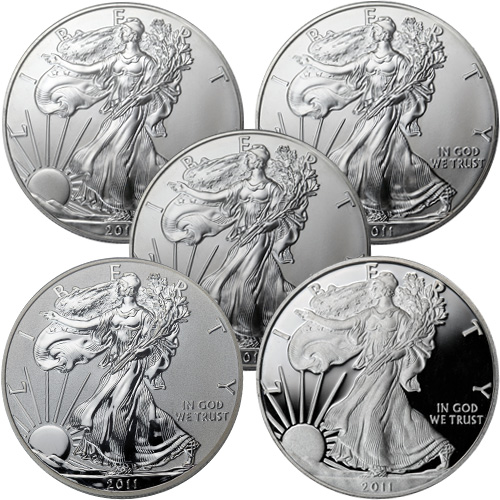 In response to record demand again for the bullion version of the coin, the US Mint increased the number of silver blank suppliers it worked with in 2011. On top of improving the coining presses and production lines at the West Point Mint, bullion coins were also struck at the San Francisco Mint for the first time since 1998.

The result was a record-breaking sum of 40.02 million bullion coins produced. That wasn’t all that was big though in 2011. The US Mint struck two versions of the burnished coin, which returned after a two-year hiatus. The standard W-burnished coin was made available for individual purchase, while an additional S-burnished coin was available in a collector’s set.

Included in this 2011 Silver American Eagle 25th Anniversary Five-Coin Set you’ll find a total of five different 2011 Silver Eagles. In addition to the standard striking of a proof coin at the West Point Mint, a burnished coin at the West Point Mint, and the standard bullion silver coin, the set includes an additional burnished coin from the San Francisco Mint and a reverse proof from the Philadelphia Mint.

Reverse proof American Silver Eagle coins feature a brilliant, unique finish that includes a deeply-mirrored, clear finish to the design features of the coin. Alternatively, the background field of the coin bears a strong, frosted finish for maximum contrast between the design and background.

On the reverse of all Silver American Eagle coins you’ll find the image of the heraldic eagle of the United States, created in 1986 by then-Chief Engraver of the United States Mint, John Mercanti. The obverse of the 2011 Silver American Eagle coin includes the Walking Liberty design from Adolph A. Weinman. This features the image of Lady Liberty walking forward toward the setting sun as a symbol of the nation’s constant drive toward a brighter future.

Please don’t hesitate to contact Silver.com at 888-989-7223, chat with us live online, or send us an email with questions.