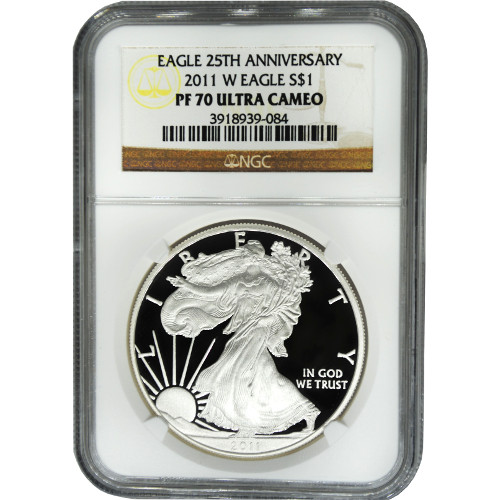 The 2011 issue of the Silver American Eagle coin is one of the most popular in the more than 30-year history of the Silver Eagle Series. These coins marked the 25th anniversary of the United States Mint’s introduction of the coins, which are now the single most popular products in the world. Silver.com now offers the 2011-W 1 oz Proof Silver American Eagle coin from the 25th Anniversary lot with a perfect grade.

Each 2011-W 1 oz Proof Silver American Eagle in this listing is a perfect specimen with a PF70 grade. Coins in this condition exhibit full, original mint luster and bear no detracting flaws of any kind. An Ultra-cameo finish is one in which the design set has a strong, frosted finish and the background is deeply-mirrored and clear.

On the reverse of all Silver American Eagle coins you’ll find the image of the heraldic eagle of the United States, created in 1986 by then-Chief Engraver of the United States Mint, John Mercanti. His image includes the bald eagle behind the nation’s heraldic shield as it clutches the arrows of war and the olive branch of peace.

The obverse of the 2011-W 1 oz Proof Silver American Eagle coin includes the Walking Liberty design from Adolph A. Weinman. This features the image of Lady Liberty walking forward toward the setting sun as a symbol of the nation’s constant drive toward a brighter future. This originally appeared on the Walking Liberty Half Dollar from 1916 to 1947.

If you have any questions, Silver.com encourages you to reach out to our customer service department. You can contact us on the phone at 888-989-7223, reach out to us online using our live web chat, or send us your inquiries via email.