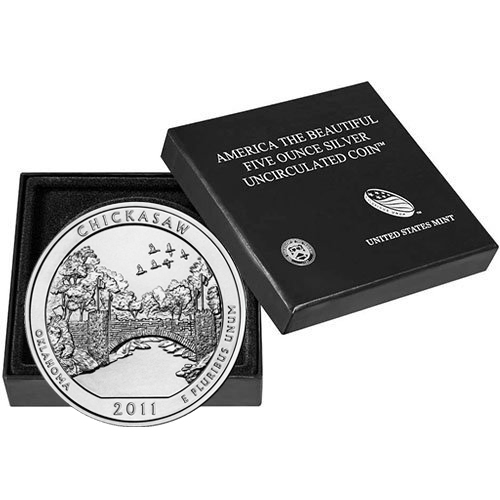 It didn’t take long for silver enthusiasts to jump on the coins in the America the Beautiful Series from the United States Mint. Introduced in 2010, the collection of silver for sale features five new designs each year and offers bullion coins alongside burnished options for collectors. The 2011-P 5 oz Burnished Silver ATB Chickasaw Coin is currently available to you for purchase online at Silver.com.

Chickasaw National Recreation Area is named for the Chickasaw Indian Nation, an indigenous tribe forcibly relocated to this part of Oklahoma in the 1830s. The tribe sold the federal government the original 640 acres that founded the park in 1902 as Sulphur Springs Reservation. The park has expanded and been renamed during the past century to protect more springs, lakes, and streams within the area.

The park is popular with outdoor recreation enthusiasts. In addition to the springs, streams, and lakes for swimmers, boaters, kayakers, and canoers, the park’s largely forested land is great for camping, hiking, and biking.

On the reverse of 2011-P 5 oz Burnished Silver ATB Chickasaw National Recreation Area Coins is the image of the Lincoln Bridge within the park as it crosses over a small creek. The Lincoln Bridge is one of the older and more iconic features of the park. It was built in 1909 out of Limestone to honor the 100th birthday of Abraham Lincoln, 16th President of United States.

The obverse of 2011 Burnished Silver ATB Chickasaw Coins includes the left-profile portrait of President George Washington. The first Commander-in-Chief of the United States of America, Washington’s portrait has been on the US circulation quarter since 1932 when it was put there to honor his 200th birthday.

These 2011-P 5 oz Burnished Silver ATB Chickasaw Coins are available to you with individual presentation boxes from the United States Mint and come with an included Certificate of Authenticity. Burnished ATB Coins are different from their bullion counterparts in two ways. The vapor blasted finish gives a matte visual, and each burnished coin has a “P” mint mark where the bullion coins have none.