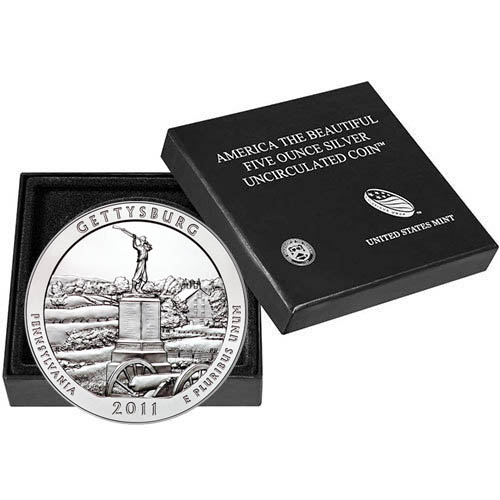 America the Beautiful coins from the United States Mint are available in two different versions for each design release. The investment-grade bullion coins are produced in great numbers and available for purchase individually or in bulk. Burnished Silver ATB coins have lower mintage figures, are aimed at collectors, and ship individually with distinctive presentation packaging. The 2011-P 5 oz Burnished Silver ATB Gettysburg Coin is now available to you for purchase online at Silver.com.

The Battle of Gettysburg is widely regarded as the turning point of the American Civil War. The battle was fought from July 1st to July 3rd in 1863 and marked the northernmost incursion of Confederate forces into the Union. The battle itself included many pitched skirmishes that had the potential to swing the outcome one way or the other. Today, Gettysburg National Military Park preserves as much of the land around Gettysburg, Pennsylvania as possible.

Gettysburg National Military Park preserves most of the original battlefield from the Battle of Gettysburg, as well as numerous areas of land related to the battle in the surrounding area. This includes buildings that served as reserve depots, supply caches, and field hospitals. The park also includes Gettysburg National Cemetery and Gettysburg Museum and Visitor Center.

The obverse of the 2011 Burnished Silver ATB Gettysburg Coin includes a left-profile portrait of President George Washington. This is the same design from the US circulation quarter and was modernized for this series.

On the reverse side of 2011-P 5 oz Burnished Silver ATB Gettysburg Coins is the monument honoring the 72nd Regiment Pennsylvania Volunteers. The 72nd was part of the broader Union force that defended Cemetery Ridge at the center of the Union line. In the most pivotal action of the battle, 12,500 Confederate troops under Major General George Pickett tried to break through the center of the Union line. The 72nd helped beat back the charge and inflict great losses on the Confederates.

We encourage Silver.com customers to call us with questions about silver for sale at 888-989-7223. You can also reach out to us online through our live chat and email address.