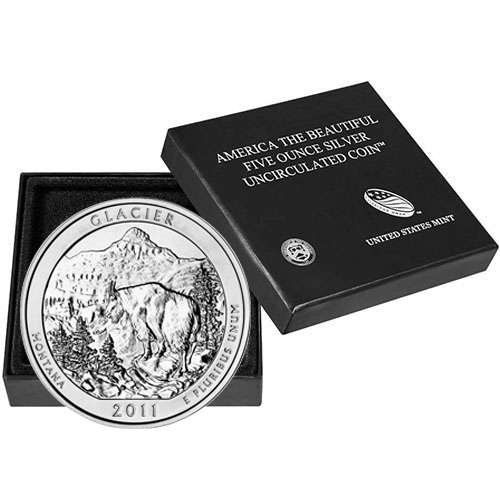 Glacier National Park is one of the most pristine regions of land in the United States. The park is home to a variety of large mammals unique to North America, which include the grizzly bear, moose, and mountain goats. Rare species such as the wolverine and Canadian lynx inhabit the bounds of the park. Today, 2011-P 5 oz Burnished Silver ATB Glacier Coins are available to you online at Silver.com.

The America the Beautiful Series of silver coins include a total of 56 designs issued between 2010 and 2021. The Treasury Department has the power to extend the collection through 2033 if demand and interest are sustained. The coins come in an investment-grade bullion coin and burnished collectible coin.

Burnished Silver ATB Coins are vapor-blasted to give the coins a unique finish. Each coin has a matte, frosted finish and has less visual shine than the bullion coins. All 2011-P 5 oz Burnished Silver ATB Glacier Coins come with a commemorative display box from the United States Mint and include a Certificate of Authenticity.

On the obverse of 2011-P 5 oz Burnished Silver ATB Glacier Coins, you’ll find the image of President George Washington. The nation’s first president is available on the obverse side of the nation’s circulation quarter and was created in 1932 by John Flanagan to mark the 200th anniversary of his birthday.

The reverse of 2011 Burnished Silver ATB Glacier Coins includes the image of a mountain goat resting along the edge of a cliff. Reynolds Mountain is visible in the background of the coin design. Glacier National Park was established on May 11, 1910, and almost immediately became a tourist attraction for those looking to challenge themselves in the nation’s great outdoors.

Please feel free to reach out to Silver.com with your questions. Our customer service team is available to you at 888-989-7223, online using our live chat service, and via our email address.