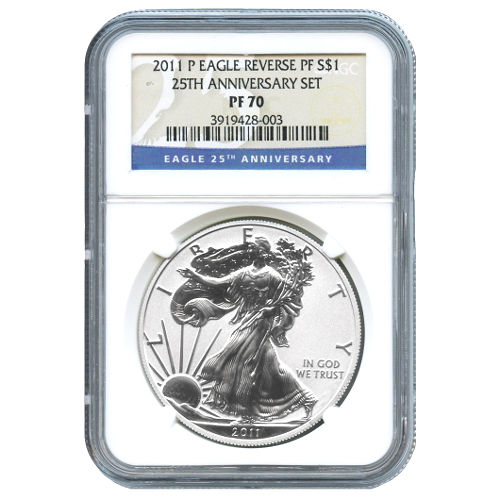 To celebrate 25 years of production, the United States Mint produced an American Eagle 25th Anniversary Silver Coin set. The set consisted of five coins shipped in lacquered presentation cases. In addition to the standard bullion coin, West Point proof, and West Point burnished version, the US Mint struck a burnished coin at the San Francisco Mint and a reverse proof coin at the Philadelphia Mint.

Each of these 2011 Silver American Eagle reverse proof coins earned a PF70 grade from the NGC. These perfect specimens have their full, original luster from the mint and no detracting flaws or blemishes of any kind.

A reverse proof coin features opposite visuals from that of a proof coin. On these coins, the strong, frosted finish is used on the background field of the coin, while the design sets have a deeply-mirrored, clear appearance.

On the obverse is the standard image of Walking Liberty. First created in 1916 by Adolph A. Weinman, this depiction of Lady Liberty was used on the Walking Liberty Half Dollar from its creation through discontinuation in 1947.

The reverse features the heraldic eagle designed by John Mercanti in 1986. The former Chief Engraver of the US Mint, Mercanti’s heraldic eagle clutches arrows in one talon and an olive branch in the other, while 13 stars located above its head represent the original American Colonies.

If you have questions, don’t hesitate to ask. Silver.com associates are available at 888-989-7223, online using our live chat, and via email.