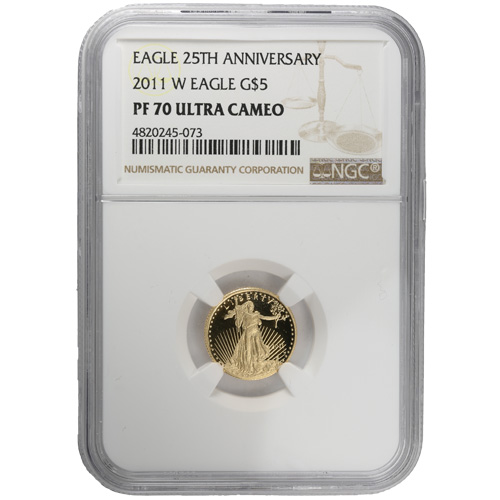 Among the three fractional-weight coins available in the Proof Gold American Eagle Series, the 1/10 oz coin has long been the favored choice of those buying gold. The 1/10 oz Proof Gold Eagle always outsold its fractional counterparts, and until 2008, it had also outsold the 1 oz coin in every year. The 2011 1/10 oz Proof Gold American Eagle is currently available to you for purchase online at Silver.com in perfect condition.

The 2011 1/10 oz Proof Gold American Eagle coin had a significant decrease in demand compared to its 2010 counterpart. The 1/10 oz coin saw mintage drop by 11,588 despite the US Mint’s confidence that perhaps the coins would have higher demand in 2011. The mint was so confident that it had significantly raised the maximum mintage caps in place on all four coins and the 4-Coin Proof Gold Eagle Set.

On the obverse of 2011 1/10 oz Proof Gold American Eagle coins is the image of Lady Liberty which was created in 1907 by Augustus Saint-Gaudens. This design was created for the $20 Gold Double Eagle and remained there until 1933 when gold coining ceased in the US. The reverse of 2011 Proof Gold Eagles includes Miley Busiek’s design of a family of bald eagles.

Images shown are examples only. Actual item appearance is subject to change, but will always correlate with title and descripti