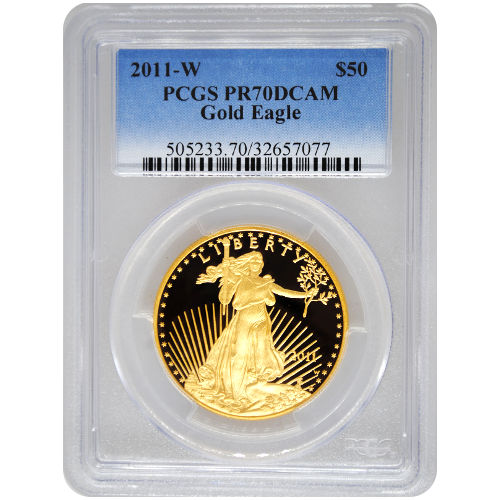 Lady Liberty and the bald eagle are national icons in the United States that represent freedom, majesty, and power. While the former has stood guard over New York’s harbor for more than 130 years, the latter has been the official national emblem since 1792. Each image has appeared on countless American coins, but few are as captivating as the Gold American Eagle. The 2011-W 1 oz Proof Gold American Eagle is now available on Silver.com.

Proof coinage originated at many mints more than a century ago. The original purpose of proof coins was to test the quality of the dies in bullion coin production, and assess the accuracy of the coining press during the striking process. Afterward, many proofs were kept as a means of archiving coin production.

Each of the Proof Gold American Eagles in this product listing has a perfect PR70 grade. Perfect proof coins have their full, original luster and lack any hairlines, contact marks, blemishes, or detracting flaws. The term deep-cameo refers to the strong, frosted finish of the design set and the deeply-mirrored, clear background field.

On the obverse of all Gold American Eagle coins is Augustus Saint-Gaudens’ depiction of Lady Liberty. Saint-Gaudens was personally chosen by President Theodore Roosevelt to revive American gold coin design in 1905. His Liberty depiction first featured on the $20 Gold Double Eagle in 1907, and is considered by most the greatest American coin design ever.

The reverse features the image of a family of nesting bald eagles. In the depiction, a male returns to the nest with an olive branch in its talons, where a female is standing guard over the group of hatchlings in the nest. Miley Busiek created this image in 1986 specifically for Gold American Eagles.

If you have questions, don’t hesitate to contact Silver.com. Our associates are standing by on the phone at 888-989-7223, online through our live web chat service, and via email. If you are looking for similar products, be sure to check out our selection of IRA Approved Gold.