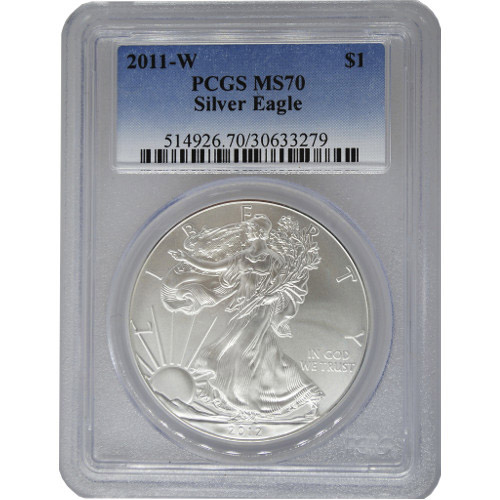 The 2011 Burnished Silver American Eagle coin is one of the most significant releases in the relatively short lifespan of this prized collectible coin from the United States Mint. While the proof Silver Eagle has been available since the program’s 1986 launch, the burnished collectible coin only recently debuted in 2016. The 2011-W 1 oz Burnished Silver American Eagle Coin is available for you to purchase online today at Silver.com.

The Burnished Silver American Eagle was suspended in 2009 and 2010 as the US Mint faced a crunch for silver blanks. Bullion coin production was surging during the Great Recession, and both the proof and burnished coins were halted in 2009. As the proofs returned in 2010, the burnished remained sidelined while the mint continued its focus on bullion coining.

On the obverse of 2011 Burnished Silver American Eagle coins you’ll find the image of Walking Liberty. Created by Adolph A. Weinman in 1916, this image depicts Liberty as her graceful figure walks toward the setting sun wrapped in the American flag. It originally appeared on the nation’s half-dollar coin from 1916 to 1947.

The reverse of all 2011-W Burnished Silver American Eagle Coins includes the image of the heraldic eagle of the United States. This design is often used by government agencies and departments as an official emblem, and it was modernized in 1986 by John Mercanti for use on the Silver Eagles.

The 2011-W Burnished Silver Eagles in this listing are considered perfect specimens. Graded Mint State 70 by the PCGS, each coin shows full, original mint lusters and lacks any sign of detracting flaws on the surface areas of the coin.

All Burnished Silver Eagles are produced by the United States Mint at its West Point Mint facility, as indicated by the “W” mint mark on the reverse field of the coin below the heraldic eagle’s right talon (left side as coin is viewed).

We encourage Silver.com users to call us at 888-989-7223 with questions. You can also reach out to us online through our live chat and email address.