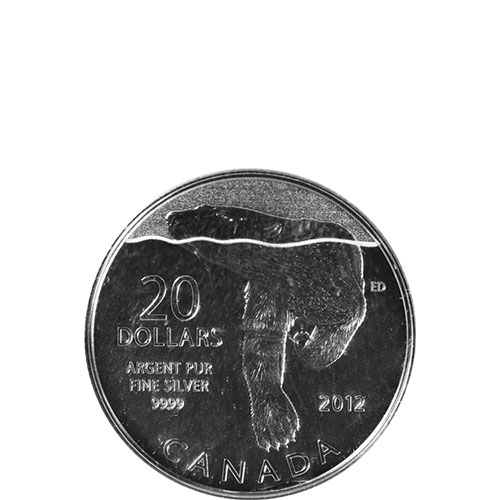 Canada’s Face Value Coin Collector series was a popular way for individuals to buy fun and unique coins to start or add to collections. Find out more about the 2012 1/4 oz Silver Canadian $20 Polar Bear Coin below, including how you can buy it from Silver.com.

The obverse design of this 2012 Silver Canadian $20 Polar Bear Coin features a right-facing effigy of Queen Elizabeth II. Canadian circulating coins have used this image of the queen since 2003, and it’s also used on most of the commemorative coins issued by the Royal Canadian Mint. The design is by Susanna Blunt, and you can find her initials on the shoulder of the portrait. The obverse inscriptions include the name of Her Majesty as well as the phrase D G Regina, which is abbreviated Latin for By the Grace of God, Queen.

The reverse design of this coin features a lifelike image of a polar bear swimming on the surface of the water. Polar bears are actually classified as marine mammals, and they can swim for great lengths at a time. They often swim for hours between various pieces of land or ice, and they are fairly fast swimmers, clocking as much as 6 miles per hour on some occasions. The design of this coin is unique in that the polar bear is featured on the upper right instead of centered, and the inscriptions that spell out face value, country, date, and silver content are placed across the field where the image is not.

Your coin will ship in a plastic flip or an individual capsule to protect it from issues during transport. This coin is interesting because it has an official face value, but it’s considered a noncirculating collector item. You can’t use the coin as legal tender at a store because of this, and banks in Canada may choose whether or not to accept the coin or redeem its face value. The Royal Canadian Mint, however, may redeem the face value on coins returned to it.

If you’re interested in adding a fun conversation piece or an animal-themed coin to your collection, the 2012 Silver Canadian $20 Polar Bear Coin might be just the item for you. Call us at 1-888-989-7223 or reach out via email or chat if you have any questions when you buy silver.