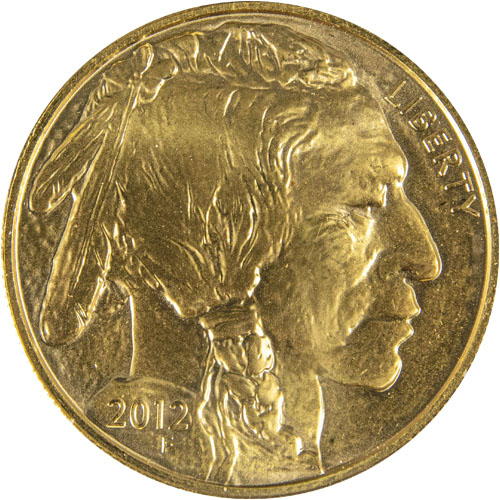 The 24 karat gold, 1 ounce Gold American Buffalo coin series is in its seventh year. These investment-grade coins have their weight, content, and purity guaranteed by the US government. Other than 2008, the Gold Buffalos have only been struck in this 1 ounce size. The Bullion and Proof Gold Buffalos are struck at the West Point Mint, with only the Proof coins bearing a W mint mark. By law, the gold in the coins is required to come from newly mined domestic sources. Currently, Silver.com has the 2012 1 oz Gold American Buffalo coin available for purchase.

The Gold American Buffalo obverse depicts a Native American Chief’s right-facing profile. It is said that the profiles of 3 different Indian Chiefs were combined to create this one profile. The 3 Indian Chiefs believed to be used were Chief Iron Tail of the Oglala Lakota, Chief John Big Tree of the Kiowa, and Chief Two Moons of the Cheyenne. This Gold Buffalo obverse appeared originally as the Buffalo Nickel’s obverse design. It was chosen to be featured again since it is considered to be among the best designs of any US coin.

The Gold American Buffalo reverse depicts an American Buffalo’s left-facing profile. The model for this design is believed to be the massive buffalo of the Central Park Zoo, Black Diamond. This Gold Buffalo reverse also originally appeared on the Buffalo Nickel, as its reverse, and like its obverse design counterpart, was chosen to be featured again due to it being among the best design of any US coin.

The obverse and reverse designs that appeared on the Indian Head – or Buffalo – Nickel were created by American sculptor James Earle Fraser. These designs – and the Buffalo Nickel – were struck by the US Mint from 1913 to 1938. When Public Law 109-145 was written (also known as the Presidential $1 Coin Act of 2005), it included several stipulations regarding a new coin series. Most significantly, the new coin series must be produced in 24 karat gold – this was a first for the US Mint. Additionally, it was stipulated that Fraser’s Buffalo Nickel designs be used as the obverse and reverse of the Gold American Buffalo .9999 pure gold coin. These coins were created to, at least in part, keep pace with the 24 karat gold coin offerings of other countries, for instance, the Canadian Gold Maple Leaf and the Chinese Gold Panda.

Our Silver.com Customer Service team is ready to answer any questions you may have when buying gold. We can be reached via phone at 888-989-7223, via our online live chat, or via our email.