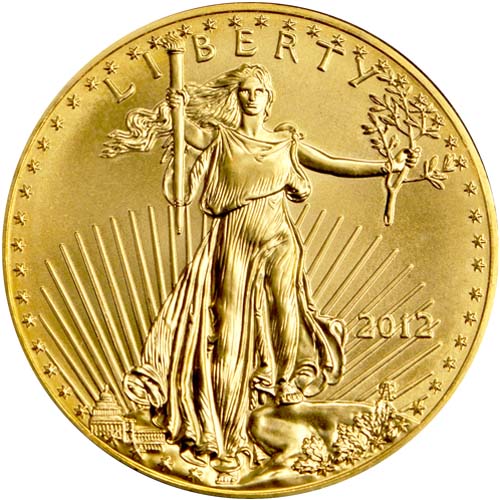 As the Great Recession eased its panicked grip on global stock markets, investors remained jittery and the price of gold continued to rise. The impact on the Gold American Eagle was varied from year to year. Beyond the spike in 2009 and 2010, the Gold Eagle would ebb and flow with minor blips in global markets in the years to come. Today, 2012 1 oz Gold American Eagles are available to you online at Silver.com.

The 2012 release of the Gold Eagle coins was unique. In the face of rising prices for gold, many moderate investors were pushed out of the market due to sky-high costs to obtain the coins. This had a particularly stark impact on the 1 oz gold coins because of their higher content, and therefore, cost.

The 2012 1 oz Gold American Eagle available to you for purchase today is in BU condition. Coins in BU condition feature no wear and tear, but you may notice minor flaws from production. These include issues such as breaks in the luster, spotted surfaces, and contact marks.

Gold Eagle coins feature Augustus Saint-Gaudens’ Liberty image on the obverse. This design was originally created in 1907 by an ailing Saint-Gaudens, who would not live long enough to see it grace the $20 Gold Double Eagle from 1907 to 1933 or know that his creation went on to become the most coveted in American history.

The reverse of 2012 1 oz Gold American Eagle coin features a unique design from Miley Busiek. Created in 1986 exclusively for the Gold Eagle, it depicts a male bald eagle flying over the family nest, where a group of hatchlings rests under the watchful eye of a female.

Feel free to reach out to Silver.com at 888-989-7223 if you have questions. We’re also available online via our live chat and email features.