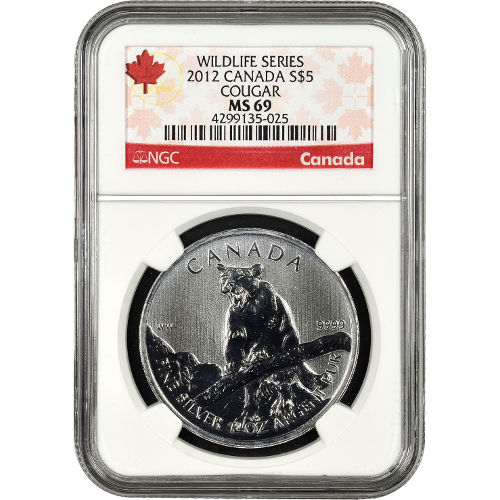 Canadian Silver Wildlife Series coins debuted in 2011 with the release of the Silver Canadian Wolf. The series eventually included six designs in total, released over the course of a three-year period. The wolf was followed in 2011 by the grizzly bear, with the cougar followed in 2012 by the moose. A pronghorn antelope and wood bison designed rounded out the program in 2013.

Each 2012 Silver Canadian Cougar coin in this Silver.com product listing is certified Mint State 69 by the NGC. Each coin has its full, original mint luster and no more than two minor detracting flaws.

The reverse face of the coin features the image of a cougar as it looms over a fallen tree branch, with its mouth agape as it lets out a roar. The image is surrounded by engravings that identify the nation of issue, purity of the coin, weight of the coin, and metal content contained within.

On the obverse is Susanna Blunt’s 2003 depiction of Queen Elizabeth II. The right-profile portrait of Her Majesty currently graces the obverse of all Canadian coinage, and is included with inscriptions that bear the Queen’s name, year of issue, and the face value of the coin.

The Royal Canadian Mint was founded in 1908 in Ottawa. Today, the mint has expanded to include a modern facility in Winnipeg that enabled the government to increase production capacity.

If you have questions, please don’t hesitate to contact Silver.com at 888-989-7223, chat with us live online, or send us an email. 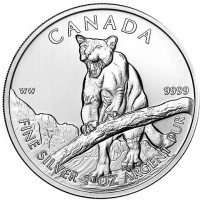