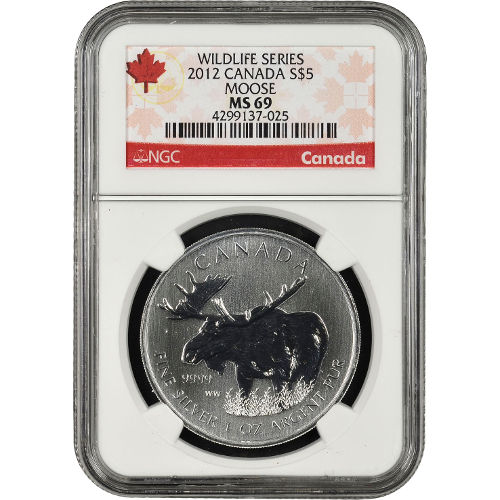 One of the most popular coin programs from the Royal Canadian Mint in the 21st century was the Canadian Wildlife Series. Celebrating the famous wild residents of the nation, the series focused on creating limited-edition bullion coins with impressive .9999 purity. Today, the 2012 1 oz Silver Canadian Moose Coin is available in near-perfect condition on Silver.com.

Canadian Wildlife Series coins honored the most popular native species found in North America, and living in great numbers across Canada. The timberwolf, grizzly bear, cougar, moose, pronghorn antelope, and wood bison featured in the series. This 2012 1 oz Silver Canadian Moose Coin was the final release of 2012, and the final coin in the series designed by Royal Canadian Mint Assistant Engraver William Woodruff.

These 2012 1 oz Silver Canadian Moose Coins are considered near-perfect specimens by the NGC. Coins with an MS69 grade have their full, original mint luster and a maximum of two, minor detracting flaws on the surface.

On the obverse face of the coin you’ll find the familiar right-profile portrait of England’s Queen Elizabeth II. Her portrait was designed in 2003 by Susanna Blunt, and is featured along with engravings of “Elizabeth II,” “2012,” and “5 Dollars.”

The reverse bears the namesake design of the coin, that of a moose standing amongst the tall grass as it grazes. Engravings on this side identify the nation of issue, and the coin’s purity, metal content, and weight.

The Royal Canadian Mint was originally founded in 1908 to help the ruling British government in Canada process precious metals discovered in the Yukon Territories at the end of the 19th century. Today it is among the most respected facilities in the world.