Any quantity available for $9.49 per oz over spot!

The Royal Canadian Mint’s Canadian Wildlife Coin Series was a popular three-year program launched in 2011, and included some of the most well-known species from the Canadian wilderness. With two designs released each year, investors and collectors awaited the release of new coins each year. For a limited time, Silver.com has the 2012 1 oz Silver Canadian Moose Coin available for purchase.

The Canadian Wildlife Series of coins were introduced in 2011 with the Timber Wolf and Grizzly designs. The program featured two new coin designs released each year over the course of three years. In 2012, the Cougar coin design preceded the Moose, which is the largest land mammal in Canada and can be found roaming the forests from coast to coast.

Royal Canadian Mint Senior Engraver William Woodruff designed the moose featured on the reverse face of the coin, and was recognized with his “WW” initials engraved on this side of the coin.

On the reverse you’ll find Woodruff’s depiction of the moose, complete with its massive antlers that stretch from side to side on the coin. It is featured standing amidst tall grass, with the “WW” engraving below its head and the purity of the coin next to that. “Canada” is engraved above, with “Fine Silver 1 oz. Argent Pur” engraved on the bottom rim of the coin.

The obverse features the familiar right-profile portrait of Queen Elizabeth II. Designed in 2003 by Susanna Blunt, this effigy of Her Majesty was created as the third-generation design to feature on Royal Canadian Mint coins. Her image is surrounded by engravings of her name, face value, and year of issue.

The Royal Canadian Mint was founded in 1908 by the ruling British Empire. The need to refine massive quantities of gold and silver from the Yukon Territories resulted in the founding of what is now the official sovereign mint of Canada.

Please direct any questions you have about this product to one of our Silver.com associates at 888-989-7223. You can also connect with us online through our live chat or via email. If you are interested in similar products, be sure to check out our full selection of Canadian Wildlife Series Coins. 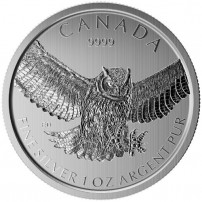