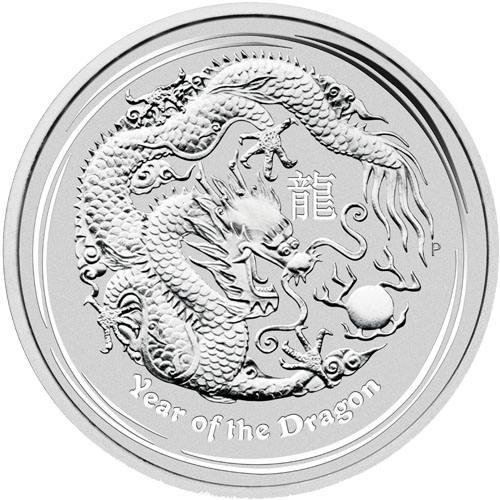 Coins in the Lunar Series have been released by the Perth Mint since 1996. Each coin has featured an animal from the Chinese zodiac and has been released annually. The Perth Mint celebrated the Year of the Dragon with this 2012-coin release. Dragons are known to embody strength, beauty, and a noble nature. As the only mythical creature include in the Chinese lunar calendar, it brings a unique quality to the Perth Mint’s Lunar Series. The 2012 2 oz Australian Silver Lunar Dragon Coin can be purchased today from Silver.com.

The 5th year of release for the Lunar Series II collection is marked by the release of the 2012 2 oz Australian Silver Lunar Dragon Coin. This coin features the most popular animal of the Chinese zodiac and is part of the second collection from the Lunar series overall. The 2012-coin ships to you in a protective plastic capsule, bears a face value of $2 AUD, and consists of 99.9% fine silver.

Beginning in 1996, the Perth Mint has released the Lunar Series I, II, and III by following each animal of the Chinese zodiac sequentially. Silver coins were introduced to the series in 1999 with the Year of the Rabbit release. Coins throughout the life of this series have been released in various purities and weights, each offering a unique reverse design that coin collectors worldwide can take advantage of.

On the obverse of the 2012 2 oz Australian Silver Lunar Dragon Coin, the portrait of Queen Elizabeth II is portrayed. This original portrait was designed by Ian Rank-Broadly and has been featured on many Australian coins. This portrait has been used in the Lunar Series from 1999 to 2019 to honor Her Majesty the Queen as a revered leader of Australia. The obverse of the 2012 coin also shows its value, weight, purity, release year, and two inscriptions: “AUSTRALIA” and “ELIZABETH II”.

The reverse of the 2012 2 oz Australian Silver Lunar Dragon Coin shows the new design of the Chinese dragon. The dragon seems to slither its body across the surface of the coin, showing off large scales and four long legs. It stares with an open mouth at the Pearl of Wisdom. The reverse of the 2012 coin also features the inscription “Year of the Dragon” and the Chinese character for “dragon”.

If you have any questions when you buy silver online, our team at Silver.com is here to help. Reach out to us by phone at 888-989-7223 or contact us via online live chat or through email.