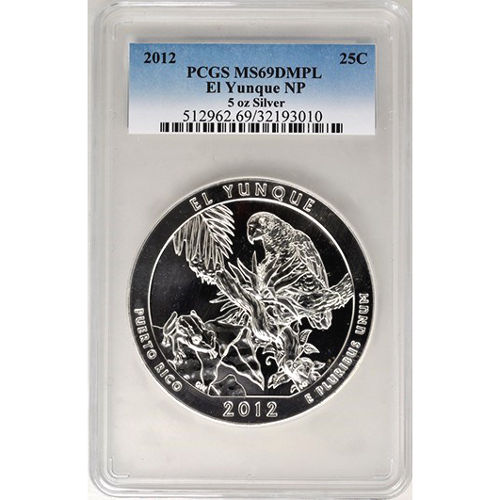 Puerto Rico has been a territory of the United States since the conclusion of the Spanish-American War. Today, all native-born Puerto Ricans are considered American citizens, so it is only fitting that the island be honored on the America the Beautiful series. The 2012 El Yunque ATB Silver Coin is now available from Silver.com.

The Treaty of Paris that brought an official end to the Spanish-American War. Among the Spanish territories ceded to the US was the Caribbean nation of Puerto Rico. Today, Puerto Rico is an easy tropical destination for many Americans to reach from the continental US. Visitors can enjoy many natural wonders, including the El Yunque National Forest. The forest, first established as a protective area by Spanish King Alfonso XII in 1876, features the only tropical rainforest in American territory.

As part of the America the Beautiful coin series, the 2012 5 oz El Yunque ATB Silver Coin was released as the first coin in the 2012 production year. Each year the United States Mint releases five new coins, with production scheduled to run through 2021.

On the reverse side you’ll see two of the rainforest’s most popular residents. A Puerto Rican parrot is visible resting on its perch in a tree, while a tree frog clings to a nearby leaf. The obverse side of the coin bears the same images you’ll find on the obverse of a standard US quarter.

Each of the coins available from Silver.com right now is in Mint State 69 condition. This grade indicates the coins have their full, original luster, and a maximum of two blemishes. The deeply-mirrored, proof-like finish on the coin is unique for a bullion coin.

We encourage all Silver.com shoppers to reach out with questions. You can contact one of our associates at 888-989-7223, online through our live chat service, or via email.