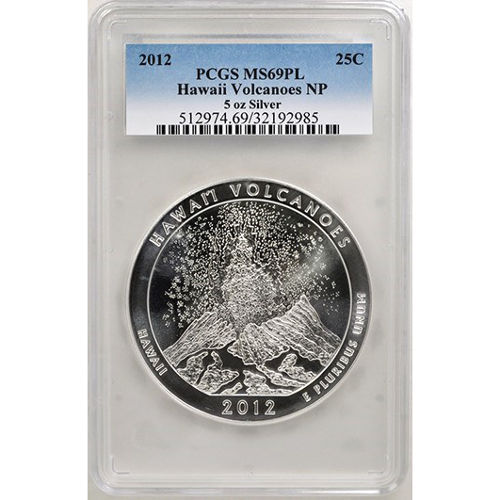 When Americans look to visit a tropical destination dominated by beaches, the US state of Hawaii comes to mind first for many. The collection of islands was created in prehistoric times through violent, volcanic activity. That activity is still visible today in the collection of active volcanoes in the state, and portrayed perfectly on the 2012 5 oz Hawaii Volcanoes ATB Silver Coins, currently available on Silver.com.

There are numerous active volcanoes around the globe that pose a threat to human civilization’s survival. In the state of Hawaii, mankind can come face to face with these wonders of nature on the big island of Hawai’i. Hawaii Volcanoes National Park was established in 1916 and consists of two active volcanoes: Kilauea and Mauna Loa. The former is among the world’s most active volcanoes, while the latter is the world’s largest subaerial volcano.

2012 5 oz Hawaii Volcanoes ATB Silver Coins were introduced as the fourth coins in the five-coin release in 2012. The America the Beautiful coin series is scheduled to run through 2021 and include 56 coins in total.

On the reverse side of this coin, magma spews forth from the rim of Kilauea as lava. Engravings on this side include the name of the state, the national park, the year of minting, and the phrase “E Pluribus Unum.” The obverse bears President George Washington’s portrait, as depicted on all US quarters.

Coins in this product listing have their full, original luster still visible. A maximum of two detracting flaws, blemishes, or contact marks may be visible. Although these are bullion coins, each one has a proof-like finish.

If you have questions for a Silver.com associate, we encourage you to reach out to us. We’re available on the phone at 888-989-7223, online using our live web chat, and via email.