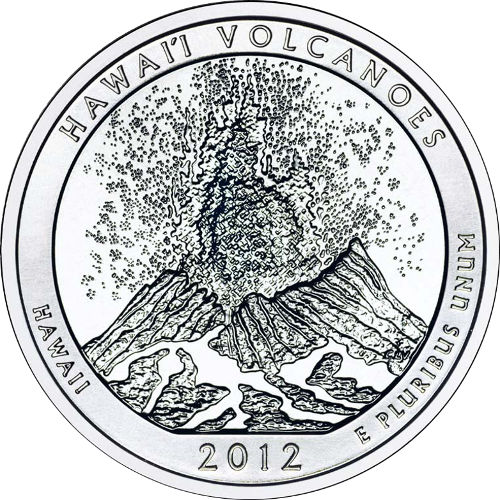 The 5 oz ATB Hawaii Volcanoes Silver Coin was released in 2012 to celebrate Hawaii Volcanoes National Park. Each coin has been struck by the US Mint in .999 pure silver and weighs 5 troy oz. With a limited mintage of only 20,000 coins, the Hawaii Volcanoes ATB Silver Coin is among the rarest in the series. These coins will ship in the same condition that we receive them from the United States Mint in either a plastic coin sleeve for single orders or a sealed tube for orders of 20 or more.

The US Mint’s ATB Coins Series pays tribute to the picturesque landscape of this country by displaying one scenic view from each of the 50 states. Depicted on the obverse of Hawaii’s commemorative silver coin is the image of an active volcano from the island’s National Volcano Park. It has been dynamically captured in the midst of eruption with sparks shooting from its mouth and molten lava spilling down its sides. Framing this stunning image is ring of text, which includes the coin’s mintage year accompanied by the phrases, “Hawaii;” “Hawai’i Volcanoes” and “E Pluribus Unum.”

Displayed on the opposite side of the coin is a portrait of George Washington, which John Flanagan designed in 1932 for the original US quarter. This portrait features the US’s first president in profile attired in his trademark powdered wig. Encircling his dignified profile along the edge of the coin are the nation’s name and the coin’s denomination. Engraved to the left and right of the portrait are the words, “Liberty” and “In God We Trust” respectively.

The 2012 5 oz ATB Hawaii Volcanoes Silver Coin will undoubtedly become a cherished centerpiece for any collection of silver. If you should have any questions about these coins before placing your order, call Silver.com at 1-888-989-7223. You can also reach our support staff through our website’s live chat feature or by email.