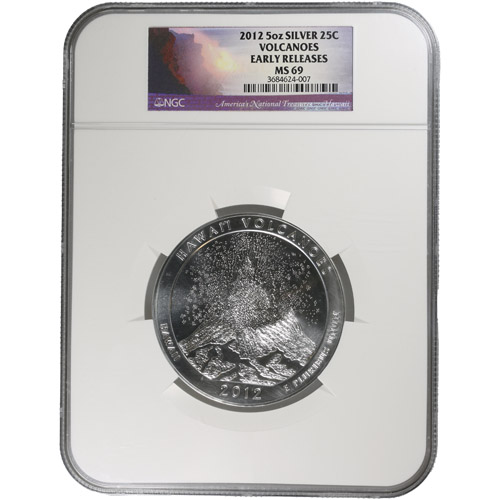 Hawaii is the westernmost state in the United States of America and the final one admitted to the Union. The only US state in the tropics, Hawaii was formed by active volcanoes that spent hundreds of thousands of years spewing magma that would eventually form an archipelago of some 137 islands that we know today as Hawaii. Now, 2012 5 oz Silver ATB Hawaii Volcanoes Coins are available to you for purchase online at Silver.com in near-perfect condition.

The state of Hawaii is located 2,000 miles west of the United States mainland, and is both the only state in the US that is located in the tropics and outside of North America. The Hawaiian Islands consist of an archipelago of some 137 islands, with eight major islands inhabited by Americans and indigenous Hawaiians on a year-round basis.

The obverse side of 2012 5 oz Silver ATB Hawaii Volcanoes Coins comes with a depiction of President George Washington. Designed in 1932 by John Flanagan, the effigy shows Washington in left-profile relief and it has features on the US quarter since 1932 when the nation marked the bicentennial of Washington’s birth.

On the reverse field of the 2012 Silver ATB Hawaii Volcanoes Coin is a depiction of Kilauea. In this design honoring Hawaii Volcanoes National Park, Kilauea is active and spewing magma. Kilauea has a history of long-running eruption patterns. For example, Kilauea erupted on a near-continuous basis from its eastern rift zone from January 1983 to April 2018.

These 2012 5 oz Silver ATB Hawaii Volcanoes Coins are available to you in Mint State 69 condition. Considered near-perfect specimens, these coins showcase full, original mint luster with no more than two minor detractions. Examples of those flaws include only minuscule contact marks or hairlines located outside the primary focal points of the coin. Early Release designations are for coins received for grading within 30 days of release by the mint.

Silver.com customer service is available to assist you with questions about silver for sale at 888-989-7223. Our team is also available online through our live chat and email address features.