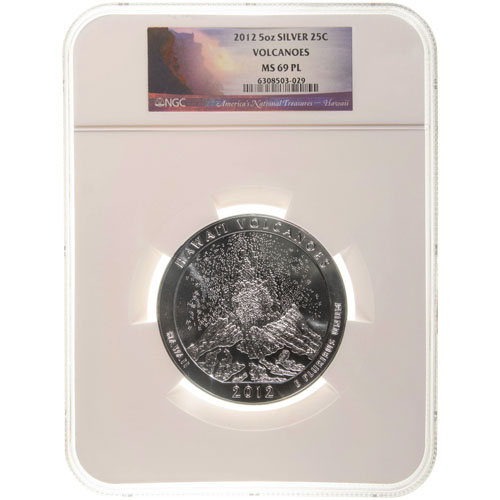 Starting in the year 2010, the U.S. Mint began the limited issues of its America the Beautiful bullion series to commemorate a series of major landmarks and historical sites across all fifty states. The 14th quarter issued in this series, the 212 5 oz Silver ATB Hawaii Volcanoes Coin, is an excellent example of the high artistic standards of these quarters. It showcases the primal beauty of the Hawai’i Volcanoes National Park, in particular the Kilauea Volcano in mid-eruption.

Sporting a mirrored proof-like finish, this fully-struck coin is available in near-flawless condition and ships in an individual protective plastic slab. Mint State 69 coins have full, original mint luster and a maximum of two minor detractions. Acceptable flaws are limited to minuscule contact marks or hairlines and must be outside the primary focal points of the coin.

The ancient volcanoes Kilauea and Mauna Loa are the core features of the Hawai’i Volcanoes National Park featured by this coin’s superbly detailed sculpting. The fourth America the Beautiful Quarter to be released in 2012 shows an evocative design of one of Hawaii’s last active volcanoes, the artwork of an erupting Kilauea volcano having been created in concert with park representatives. Containing and protecting a singularly complicated and fascinating biological landscape, this National Park is one of the most awe-inspiring sights celebrated in this popular limited-mintage series from the U.S. Mint.

The Kilauea eruption artwork which makes this quarter such a valued collectible appears on the quarter’s reverse side. This side also carries the inscriptions “HAWAI’I VOLCANOES,” “HAWAII,” “2012,” and “E PLURIBUS UNUM.”

On the obverse side is an image familiar from America’s circulation quarters since the early Twentieth Century: a profile portrait of George Washington. This classic artwork, based on a firsthand 18th-century sculpture, was first created to celebrate Washington’s bicentennial birth anniversary in 1932. The obverse also bears the inscriptions “UNITED STATES OF AMERICA,” “LIBERTY,” “IN GOD WE TRUST,” and “QUARTER DOLLAR.”

Silver.com customer service is pleased to discuss our silver for sale with you. Please call us at 888-989-7223, contact us live online, or reach out to us with any inquiries by e-mail.