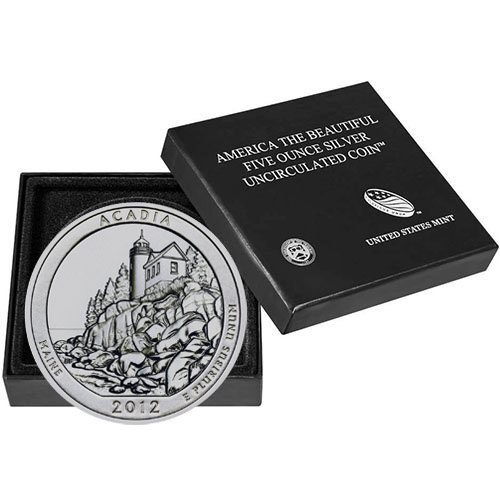 Buying silver in the America the Beautiful Series presents investors and collectors with a lot of options. Not only does the ATB Series boast a total of 56 planned designs with a possible expansion available through the 2030s, but each of those 56 designs is also available in investment-grade bullion coin and burnished collectible coin options. The 2012-P 5 oz Burnished Silver ATB Acadia Coin is now available to you for purchase online at Silver.com.

Acadia National Park in northern Maine is one of the most diverse environments you will find in any national park. Though it covers just 49,075 acres of space, the site includes mountainous terrain, rugged ocean coastlines, lakes, ponds, wetlands, and coniferous and deciduous forests. Among the key sites within the park is Cadillac Mountain. This is the tallest mountain on the eastern coastline of the US and enables the first views of the rising sun in the United States each morning.

On the reverse side of 2012-P 5 oz Burnished Silver ATB Acadia Coins is the image of the Bass Harbor Head Lighthouse, one of the more significant historical structures in the park. Acadia National Park was the first of its kind designated east of the Mississippi River in the US and remains the only one in the Northeastern United States.

The obverse side of 2012 Burnished Silver ATB Acadia Coins includes the image of President George Washington in left-profile relief. This design was created in 1932 by John Flanagan but inspired by a 1786 bust of Washington sculpted by William Cousins.

We encourage Silver.com customers to call us at 888-989-7223 with any questions. Alternatively, you can connect with us online using our live chat and email address.