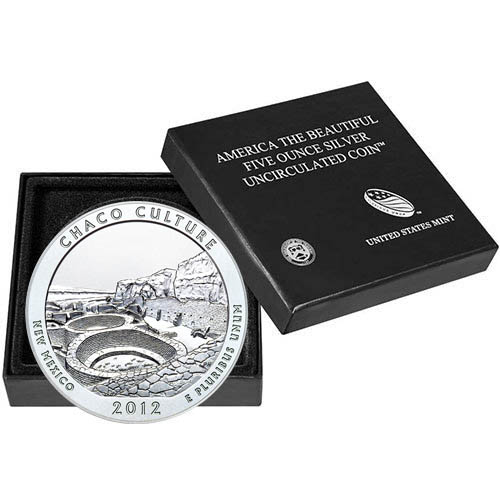 Each of the silver bullion coins offered in the America the Beautiful Series features a design representing a different US state, territory, or the District of Columbia. The designs appear in order based upon the date the site was chosen for federal protection as an important site to national history. If the sites were chosen based on date of origin however, Chaco Culture National Historical Park would have appeared much earlier in the series. Right now, 2012-P 5 oz Burnished Silver ATB Chaco Culture Coins are available to purchase online at Silver.com.

Each 2012-P 5 oz Burnished Silver ATB Chaco Culture Coin is packaged inside of a US Mint presentation case and comes with its own Certificate of Authenticity. Burnished Silver ATB coins are produced using a unique coining process that results in a matte finish to the coins compared to the shinier appearance of the bullion options.

However, Ancestral Puebloan people are believed to have migrated to this region of northwestern New Mexico between 900 AD and 1150 AD. Here, the Puebloans quarried sandstone and hauled timber from far away to build some of the largest buildings in North America. These concentrated communities remained the largest manmade buildings in North America until the 19th century.

If you have questions, please feel free to contact Silver.com. Our customer service team is available at 888-989-7223, online using our live chat, and via our email address.